Sterilisations were performed on 25,000 people under a now defunct eugenics law 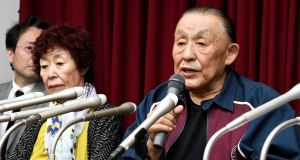 Kikuo Kojima speaking during a press conference after he filed a forced sterilisation lawsuit on May 17th, 2018, in Hokkaido, Japan. Photograph: Getty Images

When Junko Iizuka was 16 years old she was taken on a trip to the countryside. Now in her late 70s and in poor health, she dimly recalls enjoying a picnic of rice balls before being led into a clinic and told to lie on a bed. When she awoke her insides had been mutilated.

Unknown to her a committee had decided that she should never have children. Similar sterilisations were performed on about 25,000 people under a now defunct eugenics law, mainly from the 1950s to the 1970s. Most were done without consent. The youngest subjects were nine years old.

Japan passed the Eugenic Protection Law of 1948 to prevent the birth of “defective descendants”. The law honed in on people with hereditary disorders such as epilepsy, depression, schizophrenia or learning disabilities.

Women had their Fallopian tubes tied; men were given vasectomies. Prefectural boards competed to fill quotas. One commemorated the milestone of surpassing 1,000 surgeries, according to the Waseda Chronicle, an online investigative newspaper that has dug up records of board discussions.

Eugenics policies flourished across the world in the early 20th century, mostly targeting those deemed unfit (or too poor) to have children. The practice continued for years as part of population controls: China, for example, is thought to have pushed millions of people into sterilisation since its one-child policy was introduced in the 1980s.

Two decades ago Sweden agreed to compensate some of the 63,000 people sterilised under its policy of “ethnic hygiene”, which lasted until 1974. Norway and Denmark ran similar programmes, as did some American states: North Carolina, which sterilised thousands of mainly black and poor people, became the first US state to offer compensation in 2013.

However, Japan’s government appears to be digging in for a fight. With no apology in sight, at least four compensation claims have been filed by victims of the eugenics law, which was repealed after an outcry in 1996.The Health, Labour and Welfare Ministry says the sterilisations were legal at the time, when the nation was struggling with myriad social problems, including overpopulation.

One woman filed a suit at a local court in March, demanding 11 million yen in damages. Her Fallopian tubes were tied in 1972 after she was diagnosed with “hereditary feeble-mindedness”. A plaintiff in a separate suit, Saburo Kita, was taken to a hospital, aged 14, given a local anaesthetic and a vasectomy.

More lawsuits are on the way. A hotline set up this month by a team of legal experts has attracted dozens of calls from victims of the programme. After dragging its feet, the government has announced it is setting up a working group to look into the claims.

Many records have been destroyed, but those that remain are likely to be incriminating. One member of a local eugenics board meeting in 1979, for example, questioned the ethics of the practice, according to the Waseda Chronicle. “I think it’s wrong for us to decide that one cannot give birth just because one is stupid – bearing a child is a basic right,” said the member. The surgery was authorised anyway.

Disabled people fear the sentiments that drove the law linger in Japan. In 2016, a former care worker, Satoshi Uematsu, stabbed 19 people to death at a care home for the disabled outside Tokyo. Uematsu had written a letter to a politician demanding legislation to have disabled people euthanised.

Iizuka’s fate was sealed in 1962 by a report from a local welfare official accusing her of theft. Like many victims, she was never told what happened. She began to suspect when she got home from the hospital and rolled over on the floor in pain. She didn’t get her hands on her case files until she was 55 years old.

Anger keeps her going, she says. She will not rest until there is a full account of what happened. “My life has been destroyed since that day. I cannot die in regret.”

3.4m people in England may have had Covid-19, study shows 18:56
Belarusian workers back protests to pile pressure on president Lukashenko 18:49
Bavarian test lapse in 900 positive Covid-19 cases 17:04
Israel and United Arab Emirates strike historic peace accord 17:02
US plans changes to shower rules after Trump complains about washing his hair 15:54