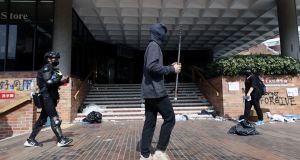 Protesters are seen in the Hong Kong Polytechnic University on Wednesday, the fourth day of a stand-off with police in Hong Kong. Photograph: EPA

Several Hong Kong schoolchildren in uniform were arrested on Wednesday morning, following calls from activists to “paralyse the whole of the city” during the early morning commute.

The move was part of a mass disruption campaign as anti-government protests have escalated significantly in recent days.

Polytechnic University has been the latest focal point, where scores of protesters are still barricaded inside, surrounded by riot police as the siege enters its fourth day.

Trains on at least five metro lines were delayed, and several major thoroughfares were blocked on the first day schools reopened following days of violent turmoil. The government put on free ferries to Hong Kong Island to help alleviate the chaos.

Mask-wearing students on their way to school joined other protesters in barricading roads and junctions with railings, bins and bricks in several key areas early in the morning.

A bicycle, railings, flower pots and other debris were thrown on to train tracks. On train station platforms, protesters obstructed train doors so they could not close, opened emergency doors and set off alarms.

Angry scenes broke out in Kowloon Tong station as commuters argued with demonstrators.

“Let us go to work. This is insane,” one woman shouted at three schoolgirls blocking a train door. Large queues formed as commuters could not enter thronged stations. Scuffles broke out in several stations.

While these disruptions appear to have been on a smaller scale than in the recent past, police moved in very quickly and made arrests in several areas, with an apparent focus on those in school uniform.

Schoolchildren were lined up and searched, and several were arrested. Images of schoolchildren in uniform being led away by police were posted from several areas across the city.

Many of those stopped were critical of the police. One 15-year-old girl in Kowloon Tong said she had been grabbed and made to line up for 20 minutes before police let her go.

“They treat us like animals. Some students cause blocks so then they grab and search every single student going to school. And threaten us and humiliate us. I know there is like a crisis right now, but it is really not OK that they behave in this way,” she said.

Schoolchildren appear to be a police target now, said Antony Dapiran, a Hong Kong-based writer and lawyer, and the author of the book City of Protest: A Recent History of Dissent in Hong Kong.

“This apparent pattern of schoolchildren being stopped and searched, and even arrested, this morning is extremely disturbing. It seems that these youth-led protests of the past several months have made merely being a young person in Hong Kong grounds for suspicion by the authorities,” he said.

“We are at a very sad point indeed if Hong Kong has reached the point where it is eating its own young.”

Authorities reopened schools on Wednesday after they were closed for six days in the face of widespread violent confrontations between police and protesters. Scores of holdouts are still inside Polytechnic University, refusing to surrender to the police surrounding the campus.

More than 1,100 protesters were arrested on Monday alone, police said, and hundreds were injured over the past few days of fierce fighting. Hospitals have announced they are overwhelmed and asked people only to come if they needed urgent treatment.

In an international display of support for the protesters, the US Senate unanimously passed a Bill on Tuesday aimed at protecting human rights in Hong Kong. The legislation threatens to revoke Hong Kong’s economic status if human rights are abused, and bans the sale of tear gas, rubber bullets and other crowd-control munitions to the city.

The laws will now be passed back to the Congress, which approved its own version last month, before being sent to the President for consideration.

China condemned the move and said it was “a serious violation of international law”.

On Tuesday night, a Hong Kong government spokeswoman said they were still hoping to hold district council elections on Sunday, but warned they would be forced to cancel them if violence continues.

More than four million voters are registered to take to the polls in the local elections in 600 polling stations across the city.

The vote is expected to be a key litmus test to gauge public opinion following nearly six months of violent turmoil that began in opposition to an extradition Bill but expanded into a wider movement demanding universal suffrage and an investigation into allegations of police brutality.