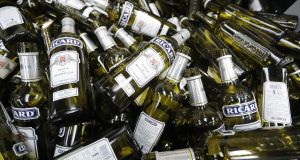 Pernod Ricard, the world’s second largest wine and spirits company and the owner of Jameson whiskey, has been dragged into a French labour court by a former employee on charges that it incites salespeople to drink.

Le Parisien newspaper published a two-page investigative report on revelations by three of Pernod Ricard’s 650-strong sales force in France. Two have left the company and a third is on medical leave. They say they were under constant pressure to drink on the job.

The blue and yellow Ricard logo is a familiar sight in France, where 52.8 million bottles of the company’s hallmark drink, milk-coloured aniseed-flavoured pastis, were sold last year. “Creators of conviviality” is the company’s official slogan.

A former manager called Julien filed a complaint with the French labour court, the prud’hommes. He recounted a breakdown in front of his wife and children during an Easter holiday in Thailand in 2016.

Before Julien left, his boss had told him, “This is the last time you’ll enjoy being with your family until the autumn. When you get back, you’ll do all the summer fairs, from May until September.”

“It’s too much alcohol,” Julien replied. “That’s what you’re paid for,” his boss said. After 16 years as a Ricard salesman, Julien says he needed caffeine pills and Red Bull to counteract the effects of drink. The labour court heard Julien’s case in September and will make a ruling by the end of this month.

A 50-year-old former pastis salesman quoted under the pseudonym Philippe said he’d been proud to be known by the nickname Monsieur Ricard. “I was drinking 12 pastis every day . . . I could have caused a car accident and been killed.” On the summer festival circuit, Philippe drank “from noon until 4pm, and from 9pm until 2 in the morning.”

The company chose salespeople with the greatest endurance for the Communist Party’s annual summer Fête de l’Humanité, Philippe says. “We drank more than 40 Ricards a day . . . If I refused a drink, my boss said, ‘Don’t you like the products you sell?’”

A saleswoman called Amélie says drinking was a ritual at Ricard. Colleagues served pastis before lunch, after meetings, in the evening and with clients. “It’s the culture of the company. If you say no, it’s frowned upon.”

At first, Amélie emptied her glass in potted plants, but she became addicted to pastis. At a three-day seminar on a boat in Barcelona, “We downed litres. We went into alcoholic comas.”

When Amélie raised doubts, her employers said, “What are you complaining about? You get paid to party.”

Amélie’s doctor put her on leave when she fell down at her child’s school. She returned to work, under addiction treatment, and told her boss she could not touch alcohol. “At the end of a meeting, he said, ‘Ah, come on. You’re not working for [the mineral water company] Perrier!”

After a relapse, Amélie went on medical leave a second time and is now preparing her own case for the labour court.

A reporter for Le Parisien found more than a dozen white-shirted Ricard “ambassadors” plying the streets of Nîmes during the three-day bullfight in late September. They offered drinks, sun hats and sunglasses with the Ricard logo to passersby. The partying town was festooned with Ricard banners, posters, pitchers and tableclothes.

Ricard’s website exhorts customers to “Please enjoy our brands responsibly”. The company issued a blanket denial to Le Parisien’s report. “Our policy for 19,000 people throughout the world is zero tolerance,” said Emmanuel Vouin, the head of press. “There is no alcohol culture. No incitation whatsoever.”