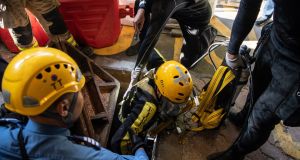 Scores of protesters were still holed up in a tense siege in a Hong Kong university on Tuesday after many surrendered overnight, including more than 200 teenagers.

Police surrounding the Polytechnic University campus arrested hundreds of people who either gave themselves up or were caught trying to escape, in the most intense and prolonged stand-off since the pro-democracy, anti-government demonstrations began nearly six months ago.

Hong Kong’s chief executive Carrie Lam said she had come to a deal with education and religious leaders to evacuate the approximately 200 protesters barricaded in the university who were under 18.

Under the arrangement, once the teenagers gave themselves up they were photographed and their ID details were taken, but they were not immediately arrested. While they were allowed go home, she did not rule out prosecuting them at a later date.

“In general, everyone should face legal consequences ... so we fully reserve the right to undertake investigations later,” she said.

All those over 18 who gave themselves up or were caught escaping were immediately arrested. Charged with rioting, they face prison terms of up to 10 years.

More than 1,100 protesters have been arrested in total in Hong Kong over the past day or so, police said.

Scores of others needing medical treatment were taken to hospital. Many were suffering from hypothermia after being drenched by water cannon, while others were wounded in clashes with police. They are all expected to be arrested in hospital.

Some escaped from the campus over the past day, a few by abseiling down from a footbridge, others through a sewerage network. But the vast majority of the escape attempts were ultimately unsuccessful, with the university surrounded by a massive police presence.

In several cases police who caugt protesters continued to strike them with batons after they had been subdued. In one instance a policeman was seen stamping on the back of the head of a protester who was lying facing down and already had his hands behind his back.

“The police are brutal. They just smash them on the head even though they have surrendered already,” one young man said. “And this is how they behave when they know the media and so many people are here, and there are so many cameras. Imagine what they do in the cells.”

A 40-year-old hotel receptionist called Judy, who provides first aid for the protesters, said the police behaviour showed how things were changing in Hong Kong.

“People ask why are things different under Chinese rule. This is one example. The police used to be like our brothers, they were here to protect us. Now they beat us and abuse us,” she said. “They are behaving the way their Beijing bosses want them to behave. Just to control us. They have changed so much.”

She pointed to the fact that while almost 5,000 protesters had been arrested since the protests began in June, only one police officer had been suspended for misbehaviour relating to the protests since then.

Public opinion in Hong Kong has been shifting in relation to the protests with events developing rapidly, with a recent poll finding that far more people blame the government and the police for the escalating violence, than hold the protesters responsible.

Since the three-day university stand-off began, protesters fearing a bloody crackdown have launched a concerted campaign to support those trapped by attacking the police cordon around the campus and police stations in the vicinity.

In legal developments, on Monday Hong Kong’s high court declared unconstitutional the anti-mask ban the government had imposed last month. In a dramatic intervention several hours later, China’s top legislative body, the National People’s Congress Standing Committee, hit out at that decision, saying only Beijing had the right to decide on issues of constitutionality.

Under the “one country, two systems” model used to govern Hong Kong since the British handover, the former colony has its own mini-constitution and judicial system, so the Chinese statement will be seen as a further encroachment by Beijing on Hong Kong’s rights and freedoms.

Democracy activist Joshua Wong condemned the standing committee’s statement, saying “When the state loses, she changes the rules of the game. Beijing never intends to play by the rules.”

In the campus, comments from some of those still barricaded inside suggest they are intent on trying to hold out. “If we try to escape we will be caught and arrested. If we surrender we will be arrested. So we will stay,” one protester said on social media, calling on the government to tell the police to withdraw.