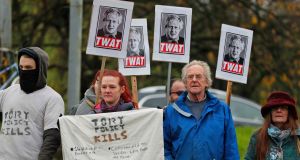 Labour has accused the Conservatives of being “clueless” about the National Health Service (NHS) after health secretary Matt Hancock sought to brush off data showing hospital performance in England at its worst ever recorded level.

Delays for hospital care and accident and emergency services are at their longest since targets were introduced and the target for cancer treatment has also been missed for three years.

Mr Hancock said increased demand for hospital services was putting pressure on the system, which he claimed was performing better than ever.

“Parts of the system are responding extremely well. In terms of getting operations done, there’s been a 7 per cent rise so when people talk about the performance of the NHS in many ways the NHS is performing better than it ever has,” he told the BBC.

Labour’s shadow health secretary Jon Ashworth said Mr Hancock’s remarks showed that the Conservatives did not care about the NHS.

“This is staggeringly out of touch. Matt Hancock is clueless about the levels of pain and misery he and his Tory cuts have caused patients,” he said.

Although polls suggest that Brexit is the most important issue for voters overall, the NHS is a more important issue for Labour voters. The latest evidence of strain on the health service comes as Boris Johnson faces criticism for his response to flooding in South Yorkshire, where hundreds of people have had to leave their homes.

Mr Johnson was heckled on Thursday during a visit to a school in Somerset and he cancelled a planned visit to a bakery near Glastonbury where protesters had gathered.

Nigel Farage has threatened to report the Conservatives to the police, claiming that Downing Street offered jobs and peerages to Brexit Party candidates who agreed to withdraw from the election. Mr Farage agreed this week to stand down his party’s candidates in 317 seats won by the Conservatives in 2019 but he is standing candidates in Labour-held seats the Tories are targeting.

“There are lots of peerages being offered. This is full-on Venezuelan style corruption. Today has been an industrial scale attempt to stop free and open politics happening in our country. Number 10 has been directly involved and many thousands of activists all over the country in a concerted way. Some of the phone calls are nice, some are less than nice,” he said.

“I expect there will be police investigations into what has gone on here. The offer of peerages for material return is clearly an offence. And I think this may unravel over the next couple of days.”

Downing Street denied making any such offer and three Brexit Party candidates who withdrew just before nominations closed on Thursday said they had not been offered peerages. Rupert Lowe, who withdrew as a candidate in Dudley North, one of Britain’s tightest marginal seats, said he feared he would split the pro-Brexit vote.