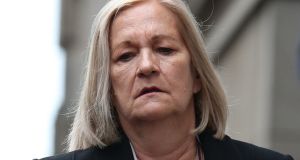 Sally Challen as she arrives at the Old Bailey ahead of a fresh trial for the death of her husband Richard Challen. Photograph: Yui Mok/PA Wire

A woman who killed her husband after years of coercive and controlling abuse will walk free from court, bringing to an end 10 years of “hell”.

Sally Challen (65) bludgeoned 61-year-old Richard Challen to death with a hammer in August 2010, the Old Bailey was told.

The mother-of-two, also known as Georgina, had been jailed for life for the murder of the former car dealer following a trial at Guildford Crown Court in 2011.

But her conviction was quashed and a new trial ordered at the Court of Appeal in London in February, in light of new evidence about her mental state at the time.

Mrs Challen, of Claygate, Surrey, admitted manslaughter but pleaded not guilty to murdering her husband on August 14th, 2010 and was due to face a fresh trial on July 1st.

But at a hearing before Mr Justice Edis at the Old Bailey on Friday, the prosecution announced the Crown accepted her plea to the lesser charge on the grounds of diminished responsibility.

The senior judge sentenced her to nine years and four months in jail, time she has already served in custody.

Speaking outside court after sentence, Mrs Challen said: “I just want to say how happy I am and want to thank my legal team and my family who have stood by me through all of this.”

The judge said the killing came after “years of controlling, isolating and humiliating conduct” with the added provocation of her husband’s “serial multiple infidelity”.

Mrs Challen appeared relieved and tearful in the courtroom packed with family and well wishers.

In a victim impact statement on behalf of her sons heard by the court, James Challen said the last 10 years had been “hell”.

He said: “We have lost our father and we do not seek to justify our mother’s actions.”

“We believe the background circumstances are such that our mother does not deserve to be punished any further.”

He said the family have conflicting feelings of “anger, grief, sadness and regret”.

Opening the facts of the case, Ms Carberry said Mrs Challens’s relationship had hit the rocks after 31 years of marriage but they had attempted a reconciliation in 2010.

But suspecting he was seeing another woman, the defendant brought a hammer out of her handbag and attacked him from behind as he ate lunch at the kitchen table.

Afterwards, she went to throw herself off Beachy Head and told a chaplain: “I killed him with a hammer. I hit him lots of times... if I can’t have him no one can.”

When police arrived at the marital home they found the body of Mr Challen, with a hand written note on top reading: “I love you, Sally.”

In her police interview, Mrs Challen said her husband was controlling but she still loved him, the court heard.

In mitigation, Clare Wade QC said Mr Challen was “domineering and controlling” towards his wife, who worked at the Police Federation.

He made “humiliating comments about her weight”, put her down and criticised her “at all turns”, Ms Wade said.

Mr Challen posed on a Ferrari next to top models and had the photo made into a Christmas card sent to their mutual friends.

The court heard “Richard pulled the strings and Sally danced”.

Mrs Challen was left “utterly betrayed” by her husband’s use of prostitutes, the court was told.

It was not until she saw a news item about one of the brothels having trafficked women that she resolved to leave him in 2009, Ms Wade said.

By April 2010, she was unhappy living alone and desperate to go back to her husband.

When she asked him to take her back, he responded with a series of conditions, including to “give up your constant interruptions when I am speaking”.

She became suspicious and anxious that he was “messing her about” but was unable to confront him, describing herself as a “meek little mouse”.

On the day of the killing, it was Mr Challen’s words “Don’t question me” that caused her to “flip” and hit him with the hammer, the court was told.–PA