Government sighs with relief as deflated atmosphere hangs over Doonbeg 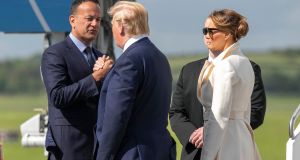 Donald and Melania Trump departed Shannon Airport on Friday afternoon bringing to a close the first visit to Ireland by the 45th president of the United States since his election.

While there was a deflated atmosphere in Doonbeg on Friday – it was a bit like taking down the Christmas decorations, said one local – Government officials are likely to have breathed a sigh of relief that the visit was over.

A visit by Trump – one of the most divisive presidents in modern times – was always going to be tricky diplomatically. He had made no secret of his wish to visit Doonbeg during his three meetings with Irish taoisigh in the White House. A visit was announced last year, but the planned trip in November was ultimately postponed due to the mid-term elections in America.

From the moment the visit was mooted, the boundaries between public and private were a point of contention

The fact that the president already owned a property in the country presented a unique challenge. From the moment the visit was mooted, the boundaries between public and private were a point of contention. Diplomatic wrangling emerged late last month over where to hold the meeting, casting doubt on whether the visit would take place. While the Government proposed Dromoland as a possible venue, amid concerns about the optics of meeting the president in Doonbeg, Shannon Airport was ultimately agreed.

The White House also expressed concern about the logistics of transporting the president to Dromoland by helicopter, particularly if there was inclement weather.

The fact that Dublin was not in contention as a stop was quietly welcomed by the Government. In fact, a visit by a president to the Phoenix Park in Dublin would have been a relatively easy affair to manage, given that the US ambassador’s residence is located there, close to Áras an Uachtaráin.

The open green space afforded by the park would also have allowed easy access for the Marine One helicopter as well as a relatively isolated space to secure. But the White House made it clear that Doonbeg – helped by its proximity to Shannon Airport – was the only real destination on the table.

Taoiseach Leo Varadkar’s appointment of John Deasy, the Waterford TD, as the Government’s special envoy to the US Congress, has led to some clashes with officials within DFA.

As part of his remit, Deasy has travelled to Washington on numerous occasions over the past two years as part of efforts to extend access to E3 visas, which are currently restricted to Australians, to Irish citizens. The Bill that would have enabled the change passed the House of Representatives last year but was blocked by one vote in the Senate.

Deasy has also struck up a close relationship with White House chief of staff Mick Mulvaney, and was his guest at a dinner in Doonbeg on Thursday evening and played golf in a four ball with Mulvaney on Friday. Dan Mulhall, Ireland’s ambassador to Washington, was also at dinner on Thursday night.

In particular, the leaking of certain details of the trip was said to have angered senior figures in the US and within the Department of the Taoiseach, in the days before Air Force One touched down at Shannon.

Trump’s visit this week was the seventh by a sitting US president to Ireland. John F Kennedy was the first to visit, spending four days in Ireland on his way back from Germany in 1963 where he delivered his famous “Ich bin Berliner” speech.

In comparison to previous presidential visits, Trump’s stay had relatively few public components – he had only one official engagement while in the country, his meeting with the Taoiseach in Shannon. While crowds of people greeted Barack Obama in College Green in 2011, Dublin this time was the site of protests.

But there were parallels with previous presidential visits. Trump may not have Irish heritage, but he has a strong link with a rural part of Ireland. While Reagan visited Ballyporeen in 1984, Obama visited relatives in Moneygall and Kennedy had tea in Dunganstown in Co Wexford, Trump has emerged as something of an adopted son in the Co Clare town of Doonbeg where his hotel is the main employer.

Memorable images such as Obama sipping a pint of Guinness or John F Kennedy drinking tea at his ancestors’ farm may not emerge from this trip but the footage of the Trump sons mixing with local residents in Doonbeg comes a close second.

The protests that greeted Trump were not unprecedented

Similarly, the protests that greeted Trump were not unprecedented. Richard Nixon, who visited during the Vietnam war, had a run-in with an egg-thrower in Dublin. A boycott of Ronald Reagan’s 1984 visit was organised by many of the country’s Catholic clergy over the president’s South America policy. Michael D Higgins, who broke with diplomatic protocol by criticising Trump’s climate change policy as “regressive and pernicious” on the eve of the visit, has form; he helped organise protests against the Reagan visit.

The visit of Trump to Ireland has renewed focus on US-Ireland relations. This was Varadkar’s third meeting with the US president. According to sources in the room, the meeting went well, and flowed more naturally than previous occasions in the Oval Office.

Trump was described as relaxed, almost “demob-happy” as he headed for his Doonbeg resort after the formalities of his state visit to the United Kingdom.

He and Varadkar engaged in what was described as “political banter”, a catch-up of about 30 minutes on issues they had previously discussed, such as the E3 visa Bill.

But the meeting also touched on one of the most challenging issues for Ireland in its relationship with the US trade and taxation.

The presence of US treasury secretary Steven Mnuchin had not been flagged in advance. A heavy hitter within the Trump cabinet, the former Goldman Sachs executive travelled with the president from London. John Bolton, the former national security adviser, also attended the meeting but did not intervene during the discussion.

Mnuchin did, however, and raised Ireland’s trade imbalance with the US as well as taxation policy. Last week Mnuchin placed Ireland on a list of nine countries the US was monitoring because of its multibillion dollar trade surplus with America.

This surplus – a result of the fact that Ireland exports vastly more than it imports from the US – has been on the radar of officials in Washington for some time, particularly in an administration that is taking the most aggressive stance on trade in decades as Trump seeks to rectify what he sees as America’s unfair trade relationships with other countries.

In the early months of his presidency, commerce secretary Wilbur Ross namechecked Ireland as one of the countries with a significant trade surplus with the US.

Since then, however, Ireland seems to have fallen off the agenda as Trump has focused on China and renegotiating Nafta, the trade agreement between the United States, Canada and Mexico.

But concerns that Trump will once again turn his attention to the European Union – in particular threatening car tariffs – means Ireland could re-emerge as a focus.

Billions of dollars of, mainly pharmaceutical, products are made in Ireland and shipped back to America

Irish officials are keen to stress that Ireland’s surplus is only in goods, not in services. But that is of little concern to the US when billions of dollars of, mainly pharmaceutical, products are made in Ireland and shipped back to America. This is exactly the kind of investment that Trump has been seeking to bring back to the US.

Similarly, the Irish Government has echoed the strategy deployed by other countries such as Germany by stressing that trade goes both ways. The Taoiseach and visiting Government Ministers to Washington regularly highlight the fact that more than 100,000 people are employed by Irish companies in the US.

But, in reality, most of this figure applies to huge companies like CRH, which have steadily been acquiring smaller American companies rather than creating new jobs in the US.

There has been broad relief that the Trump administration’s corporate tax cut did not lead to an exodus of US companies from Ireland. But there could be further storms ahead.

Later this year the Government will deploy a full-time expert from the Department of Finance to the Irish embassy in Washington for the first time – a recognition of the need to strengthen Ireland’s economic know-how in the Trump era.

Trump’s display of bonhomie this week is a welcome reminder that Irish-US relations remain strong. But there is a sense Ireland will need to continue working to protect the US foreign direct investment that is so central to the Irish economy.