Mexico tightens southern border in bid to avert US tariffs 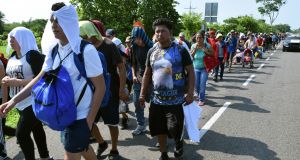 As Donald Trump’s deadline for new tariffs on Mexican imports draws near, Mexico has stepped up security along its porous border with Guatemala – deploying police and soldiers to its southern frontier and arresting prominent migration activists.

Trump last week pledged to impose 5 per cent tariffs on Mexican products on June 10th unless Mexico stops Central American migrants from travelling through its territory.

US and Mexican officials were meeting for a third day on Friday to try to avert the tariffs. US vice-president Mike Pence said in Pennsylvania on Thursday that among other issues, negotiators had been discussing a potential agreement to make it difficult for those who entered Mexico from other countries to claim asylum in the US. Mexico has long resisted that request.

But as US officials reiterated Trump’s threats this week, their counterparts south of the border have made a show of taking steps to stem the flow of migrants streaming out of Central America.

Mexican immigration officials and navy marines corralled a caravan of Central American migrants on Wednesday, less than a day after it had crossed into the country under the scorching sun.

The column of men, women and children had barely walked 12km on Mexican soil before it was stopped; previous caravans have successfully travelled nearly 4,000km across the length of the country to the US border.

“We have the full right to do it, we’re a sovereign country, we have migratory laws, which we have to apply and have to be respected,” said interior minister Olga Sánchez Cordero.

Pueblos Sin Fronteras said the detentions followed a pattern of harassment from the authorities in both countries against individuals assisting migrants and an attempt at “criminalising” the caravans.

On Thursday the finance ministry’s financial intelligence unit announced it had blocked the accounts of 26 people for “their probable link with human trafficking and illicit support of migrant caravans”.

Recent weeks have already seen a proliferation of immigration checkpoints in southern Mexico and police raids on migrant centers.

A string of caravans – some of them as many as 5,000 people – have set out from Central America over the past year. Caravan members have told reporters that travelling in large numbers offers safety from bandits and corrupt police officers, and that the groups coalesced organically, often after they were promoted on social media.

The Mexican government fears Trump’s tariffs will damage the manufacturing-for-export economy. Figures released this week showed arrests at the US-Mexico border had reached their highest level in a decade.

Observers say Mexico prefers not to mix issues such as trade and immigration in its dealings with the US, but the Trump administration is attempting to push ever increasing responsibility for stopping migrants to its southern neighbour.

“They want Mexico to stop migrants by all means possible,” said Stephanie Leutert, director of the Mexico Security Initiative at the Strauss Center at the University of Texas. “They want to outsource both enforcement and asylum processing, it seems.”

In negotiations on Thursday in Washington, Mexico reportedly offered to send 6,000 members of its newly formed national guard – a militarised police with immigration enforcement powers – to its southern border. US negotiators also proposed returning detained Guatemalans to Mexico and sending asylum seekers from El Salvador and Honduras back to Guatemala, according to the Washington Post.

Mexico’s foreign ministry spokesman Roberto Velasco Álvarez tweeted on Thursday that no agreement had been reached, but added: “The US position is focused on migratory control measures. Ours is on development.”

López Obrador has promoted development in Central America as the solution to slowing migration, though analysts say such plans would take decades to unfold.