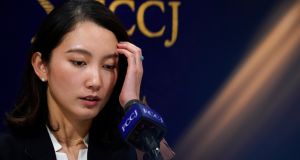 Shiori Ito at a press conference at the Foreign Correspondents’ Club of Japan in Tokyo on Thursday. Photograph: Franck Robichon/EPA

It was not hard to understand this week why Shiori Ito has become something of a feminist icon in Japan. Four years after unleashing claims of rape against a prominent television journalist, Ito sat in the audience of a packed press conference on Thursday listening impassively as her alleged rapist branded her a “habitual liar”. In the pantheon of insults hurled her way – prostitute, slut, even political spy – it was tepid stuff. “I’ve heard it all before,” she says.

Ito says she was raped by Noriyuki Yamaguchi, a former Washington bureau chief for one of Japan’s big broadcasters, at a Tokyo hotel in 2015. Yamaguchi insists the encounter was consensual. On Thursday, Tokyo district court rejected his claim and ordered him to pay Ito 3.3 million yen (€27,000) in damages. Yamaguchi fumed after the civil lawsuit decision, accusing the court and the media of bias. Surrounded by her supporters, a tearful Ito rejoiced, calling it a “landmark case” for rape victims in Japan.

That stunning denouement once looked very unlikely. Ito, a freelance journalist, says she was crushed by the reaction to her first press conference in June 2017 when she aired her story to reporters. The response was media indifference and a flood of hate mail. Trolls invaded her website, slut-shaming her. Among her sins was unbuttoning the top of her blouse during the press conference.

She had taken the rare decision to go public to highlight the shoddy treatment of rape victims. In her bestselling book, Black Box, Ito recalls being advised by a policeman to get on with her life because she would never be able to prove assault. When she persisted, she was instructed to lie on a mattress and re-enact the alleged assault with a life-size doll, while male officers looked on taking notes and photographs – standard procedure in the marshalling of evidence for a rape case. A government survey in 2017 suggested that fewer than 4 per cent of rape victims in Japan report their assaults.

The worst was yet to come: two months after her encounter with Yamaguchi, an arrest warrant for quasi rape (where consent is impossible) was issued – then revoked in murky circumstances.

Yamaguchi is a biographer of Shinzo Abe, the prime minister. He won praise from Abe supporters for reporting on allegations that the South Korean military had operated military brothels across South Vietnam during the Vietnam War, which they saw as a riposte in the long diplomatic spat over Japan’s wartime system of brothels in Korea. Now, this star reporter of the nationalist right was himself accused of sexual assault.

Ito says investigators told her they had been ordered to let Yamaguchi go (that claim has never been substantiated). In July 2017, prosecutors dropped the case for lack of evidence. A subsequent appeal upheld that decision. Yamaguchi denies Ito’s claims that he was saved by his elite connections. “I didn’t ask any politician, police officer or bureaucrat to do anything about this case,” he said during back-to-back press conferences on Thursday.

Ito was later offered a financial “settlement” from Yamaguchi via her lawyer and the police. Instead, she went to court. She further incited the nationalist cyber mob by bad-mouthing Japan to the foreign media, including participating in a documentary for the BBC. Some accused her of setting a honey trap to destroy Yamaguchi or even unseat Abe. Yamaguchi himself published an article suggesting she was a tool of anti-Abe forces. Ito says she received threats on her life. “Some of the messages I was getting really scared me,” she says.

In the meantime, Japan’s #MeToo movement briefly flared, but failed to take root in the thin topsoil of Japan’s civil society. The nation’s top finance bureaucrat, Fukuda Junichi, was forced to resign last year after claims he had harassed a female reporter, but his boss, Taro Aso, stayed in his job despite saying that the way to stop harassment of women reporters is to replace them with men. Tellingly, the reporter who outed Fukuda remains anonymous.

Ito said her victory might make it easier for such women to come forward. “I’ve been asked why Japan doesn’t have a big MeToo movement,” she said on Thursday, suggesting it was because the country isn’t ready to support victims of sexual assault. “I want to encourage other people to speak out. You don’t have to be a victim.”

The court decision against Yamaguchi was damning. Presiding judge Akihiro Suzuki said there were “serious doubts” about his credibility, while Ito had “no motive” for making a false claim. Still, he and his lawyer are appealing the decision. Ito will savour her moment of triumph and, in all likelihood, be called on to defend it again, and again.