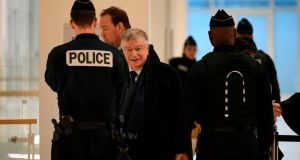 Former executives at the telecom giant France Telecom have been handed prison sentences and fines after they were found guilty of “institutional harassment” and creating a culture of routine workplace bullying that sparked a number of suicides at the company.

The landmark ruling is likely to send shock waves through the French business world. It is the first time managers have been held criminally responsible for implementing a general strategy of bullying even if they had not dealt directly with the staff involved.

The former state-owned telecom giant – which has since been rebranded and renamed Orange – was given the maximum fine of €75,000.

Former chief executive Didier Lombard, his former deputy Louis-Pierre Wenes and human resources director Olivier Barberot were each given a one-year sentence, with eight months suspended, and fined €15,000. They were found guilty for offences that took place in 2007 and 2008 when cost-cutting plans were put in place. Lombard’s lawyer said he would appeal.

The court heard harrowing accounts of what one employee had called a terrifying management strategy to destabilise workers. Families described systematic psychological abuse against staff as bosses focused ruthlessly on cost-cutting and job cuts.

Between 2008 and 2009, 35 employees took their own lives. The company had been privatised and was undertaking a restructuring plan during which bosses set out to cut more than a fifth of the workforce – more than 22,000 jobs.

The investigation focused on the cases of 39 employees, 19 of whom killed themselves, 12 who attempted to, and eight who suffered from acute depression or were signed off sick as a result of the pressure.

Many of the workers, including one who jumped out of a fifth-floor window in front of her colleagues, left notes expressing deep unhappiness at work or saying the company had made their lives unbearable.

In July 2009, a technician (51) from Marseille killed himself, leaving a letter accusing bosses of “management by terror”.

Noemie Louvradoux had told the court how her father, Remy Louvradoux, a 57-year-old public sector worker at France Telecom, killed himself days before her 18th birthday. She said: “France Telecom had destroyed his life and left him no way out.”

Ms Louvradoux’s case was said by lawyers to sum up the toxic working environment. He had worked his way up in the company from a low position to a more senior local role, but in 2006 his job was scrapped and he was made to relocate and change jobs four times in three years, while trying to work as hard as possible to avoid further change. He had written to company bosses in 2009 complaining of an endemic problem, saying: “Nothing is being done to face it up to it: suicide remains the only solution.”

Lombard, the CEO, told the court he never received the letter, which was most likely to have ended up with the human resources department.

Another worker, Daniel Doublet, described how management stopped giving him work to do. He lived in the Paris area but was relocated to Besançon, 280 450km from his family, and his tasks were never defined. “Imagine the isolation I felt,” he said. “It was as if I was nothing ? a parasite.”

The widow of Michel Bugead, another worker who took his life, said he had written by email to management to express concerns. She said he, like many others, “was very attached to the company which had allowed him to rise up the ladder in society”.

Lombard denied management bore any responsibility for the deaths. He denied having said in 2006 that he would “get people to leave one way or another, either through the window or the door”.

He told the court: “The transformations a business has to go through aren’t pleasant, that’s just the way it is, there’s nothing I could have done.”

Lombard, who was forced to step down in 2010, a few months after the suicides became headline news, argued that he was battling to save France Telecom from bankruptcy after its privatisation in 2004. – Guardian

1 Ireland enjoys hottest day of the year for second time this week
2 Quarantine will cease within fortnight, Ryanair CEO claims
3 Police officer ‘kicked in the face’ while clearing crowd from beach
4 George Floyd death: Teenager dies in clashes as protests spread across US
5 Coronavirus: Nine more deaths reported in the Republic
Real news has value SUBSCRIBE