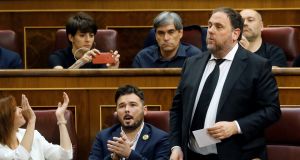 Oriol Junqueras (right) leader of the Catalan Republican Left and the former vice-president of the region was one of nice Catalan leaders given jail sentences in October. Photograph: Ballesteros/EPA 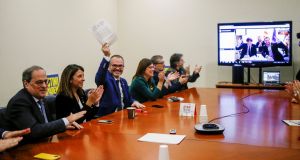 The European Court of Justice (ECJ) has ruled that Spain should have allowed the jailed former Catalan vice-president, Oriol Junqueras, to take up his seat as an MEP earlier this year, in what is seen as a major legal victory for his region’s independence cause.

In a separate case, a court has ruled that the Catalan president, Quim Torra, should be barred from office for disobedience, in a decision that can be appealed.

Mr Junqueras won a seat in the European Parliament elections in May. But the Spanish authorities did not allow him to be sworn in as an MEP because he was on trial and in preventive custody. The supreme court subsequently gave him a 13-year jail sentence for sedition.

On Thursday, the ECJ found that Mr Junqueras should have been granted parliamentary immunity “as a result of and from the time of the declaration of the election results”. Therefore, he should have been released from preventive custody, the court found.

“Justice has come from Europe,” Mr Junqueras said on Twitter. “Annulment of the sentence and freedom for all!”

The president of the European parliament, David Sassoli, called on Spain to implement the court’s findings.

Although the ruling is a blow for the Spanish judiciary, its repercussions are still not entirely clear and it is unlikely to lead to the release from jail of the former Catalan vice-president in the short term. He and eight other Catalan leaders were given jail sentences in October for their role in a failed bid for independence in 2017.

The Spanish supreme court has now given prosecutors and Mr Junqueras’s defence team five days in which to respond to the ruling.

Mr Junqueras’s Catalan Republican Left (ERC) party responded to the decision by putting on hold talks with the Socialists of acting prime minister Pedro Sánchez. Mr Sánchez hopes to form a new government in the coming weeks and the abstention of ERC in an investiture vote could be crucial.

The ECJ ruling is expected to benefit the former president of Catalonia, Carles Puigdemont, who also won a European Parliament seat that he was not able to take up. If Mr Puigdemont can demonstrate that he also should have enjoyed immunity from prosecution, that could potentially pave the way for his return to Spain after more than two years in self-imposed exile Belgium.

Also on Thursday, the Catalan high court ruled that Mr Torra should be barred from office for 18 months and fined €30,000 for refusing to remove pro-independence symbols from his government’s building during an election campaign. Mr Torra, who said he would appeal the decision, criticised what he described as “the disproportion with which Spain persecutes, criminalises, represses and tries to put in place and remove presidents and governments in Catalonia”.