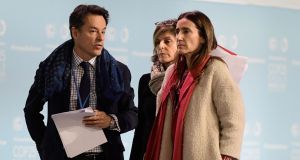 The European Union warned on Saturday that a UN summit in Madrid must send a strong signal that countries are ready to do more to cut emissions, as fears grew that international efforts to fight climate change were slipping into reverse.

The two-week round of annual climate negotiations had been due to conclude on Friday, but dragged on into the weekend as delegates failed to resolve multiple disputes over implementing a climate accord forged in Paris four years ago.

Krista Mikkonen, Finland’s environment minister, speaking on behalf of the EU, told the latest session at the talks that it would be “impossible to leave” without agreeing a “strong message” on the need to redouble pledges to cut emissions next year.

“This is something that the outside expects from us and we need to hear their calls,” Ms Mikkonen said.

Countries including Nepal, Switzerland, Uruguay and the Marshall Islands echoed the call from the EU for more ambition.

Observers say that the latest draft statements drawn up by Chile, which is presiding over the summit, for consideration by delegates lack the kind of strong commitments needed to inject fresh momentum into the faltering Paris process.

With global emissions hitting a record high last year, countries pushing for stronger climate action say that big polluters must agree to submit more ambitious pledges next year to give the accord a fighting chance of success.

Bhutan’s Sonam Phuntsho Wangdi, who chairs a bloc of Least Developed Countries, told the session he could not “face our peoples back at home” without a stronger outcome to protect the world from the worst impacts from climate change.–Reuters