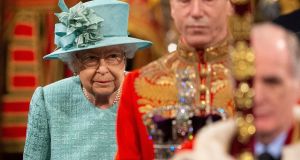 Queen Elizabeth walks through the Royal Gallery before delivering the Queen’s Speech at the state opening of parliament at Westminster. Photograph: Matt Dunham/Pool via Reuters

Boris Johnson has put new laws promising higher NHS funding and longer sentencing for terrorists at the heart of his Queen’s Speech, after winning a majority that ensures he can get his legislation through parliament.

The prime minister’s programme for government is extremely similar to the Queen’s Speech from October, but there were a few additions from the Conservative party’s election manifesto.

The main new piece of legislation is an NHS funding Bill that enshrines in law a £33.9 billion (€40 billion) cash increase in funding by 2023-4, in what appears to be largely a symbolic move.

A new counter-terrorism Bill has also been added in the wake of the London Bridge terrorist attack. It would legislate for tougher sentences for serious terrorist offenders and a 14-year minimum term for the worst.

A third new element was the promise of “espionage legislation”, which would “provide the security services and law enforcement with the tools they need to disrupt hostile state activity”.

The details are vague, but it suggested “modernising existing offences to deal more effectively with espionage” and “creating new offences to criminalise other harmful activity conducted by and on behalf of states”.

Around a third of the new Bills relate to arrangements for the UK’s departure from the EU, including the crucial Brexit withdrawal Bill that will ensure Johnson’s deal with Brussels is approved by parliament.

Other key elements of a speech widely trailed in advance included further plans for tougher jail sentences and controversial proposals to oblige people to show photographic ID before they are allowed to vote.

Eight Bills outlined were devoted to law and order, reflecting the Tories’ election focus on crime and punishment – a direction that has prompted alarm from prison reform charities.

Under one measure, violent and sexual offenders would serve a minimum of two-thirds of their sentence before becoming eligible to be released on licence, compared with half under current guidelines.

Another would significantly increase the six-month maximum jail term for foreign offenders who returned to the UK in breach of deportation orders.

A series of other Bills outlined by the queen had either already been before parliament or had been discussed in depth, for example on domestic abuse, no-fault divorce, a measure to oblige restaurants and other businesses to pass on all tips to staff, and tougher regulations on fire safety in high-rise buildings in response to the Grenfell disaster. – Guardian