People have fundamental right to be protected from climate change, Dutch court rules 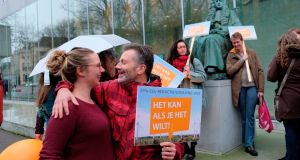 Climate activists outside the supreme court of the Netherlands in The Hague on Friday ahead of a ruling in the landmark Urgenda case. Photograph: Mike Corder/AP

The supreme court in the Netherlands has upheld a decision that the Dutch government must take urgent climate action to protect the fundamental rights of its people.

Known as the “Urgenda case”, it has been closely followed throughout the world as it was one of the first cases of climate litigation citing the right to a healthy environment and human rights – more than 1,000 cases are in train in various jurisdictions.

The court upheld on Friday a ruling ordering the government to cut greenhouse gas emissions faster than planned, and to ensure they are at least 25 per cent below 1990 levels by the end of 2020.

The court found the government had not done enough to protect its citizens from the dangerous effects of climate change, which can “threaten their lives and wellbeing”. The ruling meant a final defeat for the government in the case brought on by environmental group Urgenda Foundation on behalf of nearly 900 Dutch citizens.

An appeals court had upheld the original 2015 verdict by a lower court. Environmental initiatives announced this year would cut emissions to between 43 per cent and 48 per cent below 1990 levels by 2030, the government insisted recently.

That would be less than the 49 per cent target that Dutch authorities have set for 2030. The current EU-wide goal for CO2 emissions over the next 10 years is likely to be a 50 to 55 per cent cut under Europe’s green new deal.

‘No one is powerless’

One of the plaintiffs, Damian Rau, said the decision “will set the action we so urgently need into motion and will force governments into taking their responsibility. The judgment is an example to the world that no one is powerless and everybody can make a difference”.

A similar action in Ireland known as Climate Case Ireland (CCI) brought by Friends of the Irish Environment lost in the High Court, but it hopes to be given leave to appeal the outcome. Urgenda provided expert assistance to CCI.

CCI spokeswoman Sadhbh O’Neill said the legal significance of the Urgenda outcome “is really huge”, especially when at various stages it looked as it would not win – notably when it cited “reckless negligence”.

“A lot of legal options will now become available,” she predicted through the European Court of Justice, reinforced by the European Convention on Human Rights. “Hopefully, that will be something in the minds of the Irish Supreme Court when we get there,” she added.

Greenpeace director Jennifer Morgan thanked Urgenda for scoring “an enormous legal victory for climate protection”. In a tweet, she added: “The supreme court has confirmed the landmark ruling forcing the Netherlands to take more ambitious climate action. This puts all laggard governments on notice: act now or see you in court.” – Additional reporting Reuters