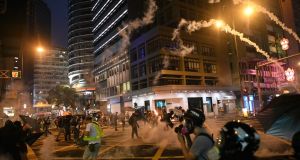 Meeting a frontline protester for coffee in central Hong Kong on Monday, the bustling commuter scenes outside in the city’s business district provided the starkest of contrasts to the unbridled mayhem that played out on the same street just the day before.

Beside where an undercover policeman pulled his gun and fired in the air just 18 hours before, some young men were tossing a basketball around.

The newspaper stand was where a row of arrested protesters were lined up with their hands zip-tied behind their backs – just a few of the 157 rounded up over the weekend, the youngest of whom was only 12.

The footbridge leading to the inland revenue office was where an Indonesian journalist was shot in the eye by police with a projectile as she was livestreaming the demonstration.

The street cleaners in orange high-vis jackets pottered around as normal across the street on Monday, sweeping up shards of glass and no doubt some reminders that 328 tear gas rounds and 306 rubber bullets had been fired here the day before.

“Yes, Hong Kongers are strong and life goes on, but it is a good guess that the atmosphere here will change again very, very quickly,” the protester, a 24-year-old student, said.

On Tuesday Beijing is marking the 70th anniversary of the founding of the People’s Republic of China with a massive parade in Tiananmen Square, one that the Hong Kong protesters plan to rain all over from afar.

Hong Kong police are urging people to stay home on Tuesday and an application for a permit to march was rejected on public security grounds. On Monday three high-profile protesters were arrested in dawn raids, and later a police spokesman warned the public of “extreme danger” as they had information protesters were about to commit acts that “are one step closer to terrorism”.

The protester laughed off the police claims but said as they were not allowed assemble legally, “which our Basic Law protects”, they have called wildcat rallies around the city to mark the anniversary of the Communist Party coming to power – a date they are dubbing “A Day of Grief”.

The protester had two requests before we met: the first that he not be named or photographed, and the second that we did not meet in a Starbucks coffee shop.

A member of the family that owns the Starbucks franchise in Hong Kong recently gave a speech to the UN Human Rights Council condemning the protesters and supporting Beijing, words that left a bitter aftertaste for some. Even if we had wanted to go to the local Starbucks, on Monday workmen were hammering in the last few nails to board it up after a full-on attack the day before.

Sipping a non-Seattle varietal, the protester said that despite the fact that more than 1,800 of their ranks had now been arrested they were determined to press on.

“We are faced with a dictatorship. That is a fact. So faced with this fact, revolution becomes a duty,” he said.

There is some speculation around Hong Kong that Beijing opted in recent weeks to show some degree of restraint until after the National Day showcase. He has heard these rumours and thinks there might be an element of truth to them, and a greatly intensified crackdown could well be on the near horizon.

He shrugs in response, and says there can be no strategy to counter that.

“In the face of tyranny, we can only fight as if it is our last battle.”