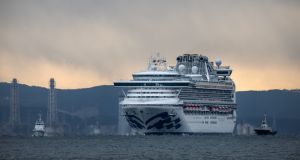 The Diamond Princess cruise ship approaches Daikoku Pier in Yokohama, Japan, where it will be resupplied and newly diagnosed coronavirus cases taken to hospital while it remains in quarantine off the port. Photograph: Carl Court/Getty Images

Ten more people on a quarantined cruise liner in Japan have tested positive for coronavirus, officials said on Thursday, as health experts stepped up efforts to find a vaccine for a disease that has provoked fears of a global pandemic.

The death toll from the virus in mainland China jumped by 73 to 563, with total confirmed infections standing at more than 28,000 there.

The virus has shut down cities and factories in China and disrupted global air travel and this week brought chaos to the sedate world of luxury ocean cruises.

About 3,700 people on Carnival’s Diamond Princess, docked off a Japanese port, face quarantine for at least two weeks on the ship, which has 20 virus cases, with testing continuing. Japan now has 45 virus cases.

Gay Courter, a 75-year-old American novelist on the ship, said he hoped the US government would send transport to take the Americans off.

“It’s better for us to travel while healthy and also if we get sick to be treated in American hospitals,” he told Reuters.

In Hong Kong, a cruise ship with 3,600 passengers and crew was quarantined for a second day pending testing after three positive cases on board.

Taiwan, which has 13 cases, banned international cruise ships from docking.

Several countries, including the United States, have banned entry to visitors who have been in China over the previous two weeks.

News of another virus hot spot emerged, linked to a mid-January company meeting in Singapore. At least three people contracted the disease after a conference held with 94 overseas staff, including one from China’s central city of Wuhan, the epicentre of the epidemic.

Authorities have not identified the company but the World Health Organisation (WHO) said it was investigating.

The latest patient in the UK was diagnosed with the infection in Brighton, the Guardian understands, and transported by the London ambulance service to an infectious diseases unit at a hospital in the capital.

“A further patient has tested positive for coronavirus bringing the total number of cases in the UK to three. The individual did not acquire this in the UK,” said Prof Chris Whitty, the CMO, in a statement.

“The patient is being transferred to a specialist NHS centre, and we are using robust infection control measures to prevent any possible further spread of the virus. The NHS is well prepared to manage these cases and we are working quickly to identify any contacts the patient has had.”

The patient will probably be admitted to the Royal Free Hospital in north London, which is one of the UK’s two main centres for what the public health authorities call high consequence infectious diseases (HCIDS). The other is in Newcastle upon Tyne, where the two first coronavirus cases were taken. London also has a unit at Guy’s and St Thomas’ hospital.

The first two cases were people from the same family of Chinese nationals who had been staying at a hotel in York. One was a student at York University and the other was a member of his family who was visiting from China. They were diagnosed last Friday. The university said the student had not been on campus or in student accommodation before his infection.

In the UK, there had been 466 negative tests for coronavirus as of Wednesday.

Singapore has reported 28 infections, some involving person-to-person transmission, a feature the WHO has said is deeply concerning and could signal a much larger outbreak.

Health officials in the United States and China have set ambitious goals for getting a vaccine to initial human testing within the next few months, although drugmakers cautioned that they have a long way to go.

“There are no known effective therapeutics against this 2019-nCoV (virus),” WHO spokesman Tarik Jasarevic said, when asked about reports of drug “breakthroughs” that boosted hopes on financial markets on Wednesday.

Hundreds of experts will gather in Geneva on February 11th-12th to try to find a way to battle the outbreak by speeding research into drugs and vaccines, the WHO said, adding that a multinational WHO-led team would also visit China.

Most of those infected with the virus recover quickly with only mild symptoms but it can lead to severe respiratory illnesses. It is too early to know how lethal it may be, as many mild cases are probably going undetected.

Tens of millions of people in China’s central province of Hubei, the capital of which is Wuhan, have been living under virtual lockdown for nearly two weeks, with train stations and airports shut, roads sealed off, and no end in sight.

Hubei reported 70 new deaths on Wednesday and 2,987 new confirmed cases, for more than 80 per cent of China’s total. Other deaths were in Tianjin city, the northeastern province of Heilongjiang and Guizhou province in the southwest.

National health officials said another 3,694 coronavirus cases were reported throughout China on Wednesday, the first day in more than a week to see a reduction in new daily cases. They did not say why.

First identified in Wuhan, the flu-like virus is believed to have originated at a city market selling wild animals.

The two deaths outside mainland China, in the Philippines and Hong Kong, have both involved visits to Wuhan, where more than 400 people have died.

Nearly 260 cases have been reported in 31 countries and regions outside mainland China, according to a Reuters tally based on authorities’ figures.

More than two dozen airlines have suspended or restricted flights to China and hundreds of foreigners evacuated from Wuhan and placed in quarantine around the world.

China, which has bristled at some measures to close borders to its travellers, was considering delaying the annual meeting of its top legislative body, people familiar with the matter said.

On Tuesday the Department of Foreign Affairs advised more than 3,000 Irish people in mainland China to be prepared to leave because of the outbreak.

In a change to its travel advice, the department said Irish people in China whose continued presence is not essential should “contact their travel agency or airlines regarding available routes out before any further restrictions may be imposed”. – Reuters/Guardian