Nancy Pelosi was seen to tear up a copy of Donald Trump's State of the Union address after the US president appeared to snub a handshake from the House speaker before his speech began. Video: Reuters 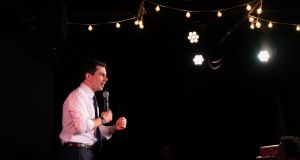 US Democratic candidate Pete Buttigieg has taken the lead in the Iowa caucuses in a major boost for the 38 year-old mayor as the primary season gets under way.

With 71 per cent of the votes counted in Iowa, the Indiana mayor is narrowly ahead of Bernie Sanders, with 26.8 per cent of the vote. Sanders is a close second at 25.2 per cent, while Elizabeth Warren is in third place with 18.4 per cent. Joe Biden secured 15.5 per cent of the vote, a potentially disappointing performance for the former vice-president despite efforts by his campaign team to play down expectations in the early-voting state.

The Iowa Caucuses – traditionally the starting point for the months-long process of choosing a presidential candidate – has been mired in chaos and confusion after the results were delayed due to “inconsistencies” in the reporting of the outcome.

Voting took place at almost 1,700 sites across the mid-western state on Monday night in the first selection process of the Democratic primaries. But the Iowa Democratic Party was forced to delay the results over “quality control” issues.

Official results began to be announced on Tuesday evening, almost 24 hours after the caucuses began and most candidates had left the state to begin campaigning in New Hampshire, the next state to hold its selection process.

Mr Buttigieg (38) is the political newcomer in the race, but has made a formidable impression since announcing his bid last April, particularly in early-voting states like Iowa and New Hampshire where he invested significant resources. The Harvard and Oxford-educated mayor served in Afghanistan and is also a committed Christian – attributes that could play well with Republicans in swing states. But he lacks the big-name recognition of his rivals which could be a hindrance in states that select their candidate later in the cycle. If elected, he would be the first gay person to hold the office of president.

As controversy dominated the Democratic race for president, in Washington tensions between US president Donald Trump and House speaker Nancy Pelosi flared at Mr Trump’s final State of the Union address before this year’s presidential election.

As the president entered the chamber shortly before 9pm, he was swamped by well-wishers and Republican members clambering to shake his hand. Ms Pelosi appeared to offer her hand as he approached the dais, but Mr Trump turned away as he handed her a copy of his speech. As he concluded his address 90 minutes later, she slowly and deliberately tore up her copy of the speech.

In an address that began with a strong emphasis on economics, Mr Trump hailed what he called “the great American comeback” and a “blue-collar boom”. Touting job numbers and growth figures, he stated that 3.5 million working-age people have joined the workforce since his election.

“We are restoring our nation’s manufacturing might, even though predictions were . . . that this could never ever be done,” Mr Trump said, claiming America had gained 12,000 new factories under his administration.

He also referenced the recent agreement on a revised Nafta deal – the North American trade agreement between the United States, Mexico and Canada – as well as the signing of a “phase one” agreement with China.

“For decades, China has taken advantage of the United States. Now we have changed that but, at the same time, we have perhaps the best relationship we’ve ever had with China, including with president Xi,” he said. “They respect what we have done because, quite frankly, they could never really believe what they were able to get away with what they were doing year after year, decade after decade.”

The speech also hit on themes such as criminal justice and national security, outlining the administration’s $2.2 trillion (€1.99 trillion) investment in the US military. He claimed that the United States’ allies were now “paying their fair share” to Nato.

Unsurprisingly, immigration was a theme, with Mr Trump noting that 161km (100 miles) of his proposed border wall with Mexico had been completed, and that more than 804km (500 miles) of wall would be finished by early next year. As in previous years, Mr Trump cited examples of illegal immigrants who had committed crimes in the United States, criticising “sanctuary cities” and states like California which offer protections to undocumented immigrants.

“The United States of America should be a sanctuary for law-abiding Americans, not criminal aliens,” he said to applause from Republicans.

He accused Democrats of trying to attempt a “socialist takeover” of healthcare, as he promised to tackle the opioid crisis.

As his speech continued, he touched on cultural issues such as religion, abortion and gun rights. Noting the high number of conservative judges appointed during his presidency, he name checked Supreme Court justices Neil Gorsuch and Brett Kavanaugh who were present in the chamber.

He called on Congress to pass legislation banning late-term abortion. “Whether we are Republican, Democrat, or Independent, surely we must all agree that every human life is a sacred gift from God,” he said.

He also claimed Americans’ gun rights were “under siege all across our country”.

“As long as I am president I will always protect your second amendment right to keep and bear arms,” he said, a comment that provoked an outburst from one spectator in the gallery who was then escorted out of the chamber.

As he began his pre-prepared address, the Republican side of the House broke into chants of “four more years, four more years” – a sign of the formidable support Mr Trump enjoys among his party nine months ahead of the US presidential election.

Among the president’s invited guests were Venezuelan opposition leader Juan Guaidó, who Mr Trump hailed as the “true and legitimate president of Venezuela”.

Mr Trump also awarded Rush Limbaugh the presidential medal of freedom – the country’s highest civilian honour. First lady Melania Trump presented the conservative media figure with the medal. Mr Limbaugh (69), a hugely influential figure on the right, announced this week he was battling advanced lung cancer. Mr Trump honoured him as “the greatest fighter and winner you will ever meet”.

Also in attendance at the address was British politician Nigel Farage.

The Democratic National Committee disputed many of the claims made in Mr Trump’s speech. It noted that black unemployment had actually fallen by 9 per cent under the Obama administration compared to only 2 per cent under Mr Trump. It also queried Mr Trump’s claims about falling prescription drug costs, noting that drug prices “have continued to skyrocket under Trump’s watch”.