Timelapse footage captures a near deserted Beijing as authorities call on the 20 million residents of the Chinese capital to stay at home amid the coronavirus outbreak. Video: Reuters 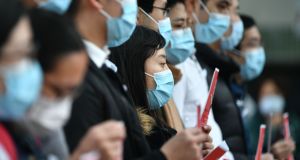 Britons in mainland China have been urged to leave as coronavirus continues to claim more lives in the country. The UK foreign office amended its travel advice after health secretary Matt Hancock said he expects more cases to be diagnosed in the UK. Officials told the PA news agency the update was a prudent step in case more commercial airlines stopped flights out of China, or China extended travel restrictions. Foreign secretary Dominic Raab said: “We now advise British nationals in China to leave the country if they can, to minimise their risk of exposure to the virus.

“Where there are still British nationals in Hubei province who wish to be evacuated, we will continue to work around the clock to facilitate this.” The foreign office added that commercial flights departing from China were still available throughout the country, except in Hubei where the virus originated. It comes as Mr Raab told MPs that the British government has been “allocated 14 places on an Air New Zealand fight today for UK nationals and their dependants”.

Meanwhile, British officials are still trying to trace 239 people who flew from the Chinese city of Wuhan to the UK before travel restrictions associated with the coronavirus came into force.

Efforts to track down and assess the travellers, who left Wuhan after the virus emerged, began last week as the crisis intensified, leading British Airways and Virgin Atlantic to suspend UK-China flights.

Three Irish people and 94 UK nationals and family members have been evacuated to Britain from Wuhan, the city in Hubei province at the epicentre of the outbreak, on two flights which arrived on Friday and Sunday.

The evacuees are now undergoing 14 days in quarantine at Arrowe Park Hospital on the Wirral.

The British Embassy in Beijing on Monday announced the last flights from China to the UK for British nationals were set to leave this week.

It said flights would be run by “partner countries” and any British nationals and their immediate families, including those with non-UK passports, must make themselves known if they wish to travel.

Separately, officials have said there are no plans to introduce a US-style travel ban on foreign nationals who had recently been in China from entering the country.

Sources told PA news agency the UK would continue to follow the advice of the World Health Organisation (WHO), which does not advocate such bans.

The death toll in mainland China from the coronavirus outbreak has risen to 425, with the total number of cases now standing at 20,438, Chinese officials said on Tuesday.

The latest figures are up from 361 deaths and 17,205 confirmed cases on Monday.

Hong Kong reported its first death linked to the virus on Monday, that of a 39-year-old man who had travelled to the territory from Wuhan. He became the second person to die outside China from the disease, after a man from Wuhan died after travelling to the Philippines.

Philippines president Rodrigo Duterte subsequently approved a temporary ban on all travellers, except Filipinos, from China and its autonomous regions.

The US, Japan, Singapore and Australia have imposed similar restrictions despite criticism from China and an assessment from WHO that they were unnecessarily hurting trade and travel.

A Canadian man on a flight from Toronto in Canada to Jamaica falsely announced to passengers that he had the coronavirus, forcing the plane to return to the airport where he was arrested, police said on Tuesday. The incident occurred on Monday during a WestJet Airlines flight from Toronto to Montego Bay. The Boeing 767 was carrying 243 passengers.

“A male was causing a disturbance on the flight, saying he had been to China and had the coronavirus,” said Sarah Patten, a spokeswoman for police in the town of Peel, close to Toronto’s Pearson international airport. After the plane landed, the 29-year-old man was checked by medical staff who concluded he did not have the coronavirus. He was arrested, charged with mischief and will appear in court on March 9th, Ms Patten said by phone. Julie-Anne Broderick, a passenger on the plane, said she saw the man taking a selfie and announcing he had the virus. “The flight attendants came, gave him a mask and gloves and just told him that he had to move to the back of the plane,” she told the Canadian Broadcasting Corp. The captain then told passengers he thought the incident was a hoax but had to return to Toronto, she added.

The Chinese government has accused the US of causing “panic” in its response instead of helping.

In a statement to the House of Commons on Monday, health secretary Matt Hancock said the virus would be around for several months yet.

Looking at the global picture, Mr Hancock said: “Currently the number of cases is doubling every five days and it’s likely that the virus will be with us for at least some months to come.

“This is a marathon, not a sprint.”

The UK department of health said on Monday that 326 UK tests for coronavirus have concluded, of which 324 are negative.

Two people, a University of York student and one of their relatives, continue to be treated for coronavirus in the specialist infectious diseases unit at Newcastle Royal Victoria Infirmary.