Utah senator Mitt Romney was the only US senator to break party lines and vote against US president Donald Trump in his impeachment trial, voting to convict Trump on one of the charges – abuse of power. Video: Reuters 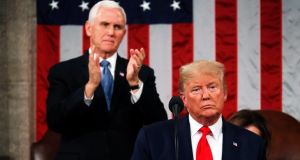 US president Donald Trump delivers his state of the union address to a joint session of Congress on Capitol Hill in Washington on Tuesday, as vice-president Mike Pence applauds. Photograph: Leah Millis/AP

The impeachment trial of US president Donald Trump ended on Wednesday night in his acquittal, capping a tumultuous few days in American politics.

The Senate voted by 52 to 48 to acquit Mr Trump on the two charges brought against him over his dealings with Ukraine, following his impeachment by the Democrat-controlled House of Representatives in December.

Only one Republican – Mitt Romney of Utah – voted to convict the president on one of the charges – abuse of power – telling the Senate that the US president was “guilty of an appalling abuse of public trust”. Citing his religious faith, he said Mr Trump’s actions were “a flagrant assault on our electoral rights, our national security and our fundamental values”.

Mr Romney, who was the Republican party’s presidential candidate in 2012, was immediately denounced by the Republican establishment, including his niece, the chair of the Republican National Committee, who tweeted:  “I, along with the GOP [Republican Party] stand with President Trump.” Mr Trump’s re-election campaign spokesman blasted Romney as “an irrelevant relic”.

Despite suggestions that some Democrats in Trump-friendly areas would side with Republicans, all 47 senate Democrats found Mr Trump guilty.

The impeachment inquiry and subsequent trial has dominated politics in Washington since last September. But despite Mr Trump’s impeachment in December, the outcome of the Senate trial was never in doubt.

All but one Republican senator voted against the impeachment charges, far short of the two-thirds majority needed for conviction, an indication of the fierce loyalty Mr Trump now commands in the Republican party, including from figures such as Marco Rubio and Ted Cruz who once railed against the billionaire businessman.

Wednesday’s vote came a day after Mr Trump used his annual state of the union address to tout his economic achievements and hail the “great American comeback” under his presidency.

But the event was overshadowed by acrimonious exchanges between the president and House speaker Nancy Pelosi. As Mr Trump concluded his 90-minute address, Ms Pelosi tore up her copy of the speech.

Earlier, Mr Trump appeared to snub her offer of a handshake.

As Mr Trump’s impeachment trial reached its conclusion, the Democratic Party’s campaign to defeat the president in November remained mired in confusion as the country awaited a final result from the Iowa caucuses.

With 75 per cent of precincts reporting, Indiana mayor Pete Buttigieg remained in the lead, narrowly ahead of Vermont senator Bernie Sanders. The 38-year-old would be the US’s first gay president if elected.