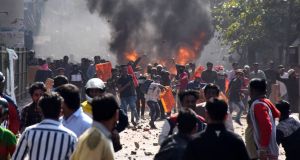 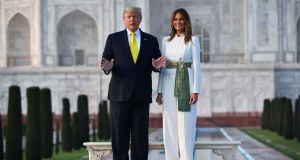 US president Donald Trump and first lady Melania Trump at the Taj Mahal in Agra on Monday. Photograph: Mandel Ngan/AFP via Getty Images

Armed paramilitary personnel were deployed across large parts of India’s capital New Delhi on Tuesday after 13 people, including a policeman, were killed in clashes between groups supporting and opposing the country’s controversial new citizenship law.

Officials said the violence, which coincided with US president Donald Trump’s overnight visit to Delhi on Monday evening, also left 150 people, including 25 police personnel, seriously injured and scores of vehicles and houses burnt down.

Even Delhi’s firefighters, unsure of their safety, declined to respond to emergency calls in the city’s violence-ridden northeastern suburbs, where groups of Muslims opposed to the Citizenship Amendment Act (CAA) and Hindus supportive of it clashed in communally sensitive neighbourhoods.

Officials said both groups were armed with guns, swords, stones, iron rods, rocks and petrol bombs, and privately compared the ferocity of the violence to that witnessed during the anti-Sikh pogrom in Delhi in 1984 after prime minister Indira Gandhi was assassinated by her two Sikh bodyguards. More than 3,000 people died during that rioting, which lasted 72 hours.

Meanwhile, all commercial establishments, schools and offices in Jafrabad, Bhajanpura, Chand Bagh and contiguous areas remained closed as rioting continued for the third consecutive day despite police and paramilitary presence.

The imposition of a colonial-era law banning the assembly of four or more people across large parts of Delhi on Monday did not deter the rioters and tension persisted. Several television camera crews and reporters were attacked by mobs and hospitalised.

Enacted last December, the CAA has provoked countrywide protests, especially in Delhi, in which at least 25 people have died in clashes with the police.

The demonstrators maintain the Act invalidates India’s constitution and secularity by basing the right to citizenship on religion.

The CAA offers Indian citizenship to six religious monitories such as Hindus, Sikhs and Christians from the neighbouring Islamic countries of Afghanistan, Bangladesh and Pakistan, but omits Muslims, who constitute about 20 per cent of India’s population of more than 1.3 billion.

They also cautioned that this disorder could spread to other parts of India and would be difficult to contain.

The BJP, however, denies all such allegations and blames opposition parties for orchestrating the violence in order to “defame” India during Mr Trump’s visit.

Coincidentally, Delhi’s carnage broke out as Mr Trump was praising India as a tolerant country while addressing a rally of mnore than 110,000 people in Mr Modi’s home town of Ahmedabad in western India’s Gujarat state on Monday.

“India is a country that embraces freedom, liberty, individual rights, the rule of law and the dignity of every human being” Mr Trump said.

In his 30-minute speech in which he mispronounced most Indian names, the US president called Mr Modi an “exceptional leader” and true friend but a “tough negotiator”.

For his part Mr Modi praised Mr Trump as a “big thinking” leader.

He also lavished praise on first lady Melania Trump, the US president’s daughter Ivanka and son-in-law Jared Kushner, all of whom were part of the visiting American contingent.

Under Mr Modi’s oversight the BJP administration in Gujarat left no stone unturned to make Mr Trump’s visit to Ahmedabad to inaugurate the world’s largest cricket stadium a spectacle.

They built walls to hide slums from Mr Trump and deployed several hundred buses to ferry locals into the stadium from across the state. Dozens of legislators were allocated quotas to dragoon spectators from their respective regions across Gujarat to the rally and cheer on cue.

Parts of the 17th century Taj Mahal, which the Trumps visited after Ahmedabad on Monday, were cleaned for the first time since the monument to love was built by a Mughal potentate in memory of his wife 300 years ago.