Eyewitness footage shows deserted streets and empty market stalls as Chinese authorities shut down the city of Wuhan in an attempt to stop the spread of the coronavirus. Video: Reuters 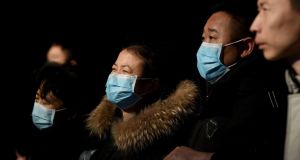 Authorities in Wuhan are rushing to build a makeshift hospital they plan to open in 10 days to treat the rising number of patients infected by the coronavirus, as cases were confirmed on Friday in all but one of China’s 31 provinces.

Cases have been detected all across China except for the far-western province of Tibet, suggesting efforts to stem the spread of the virus with city lock-downs and travel bans were failing.

The official death toll has risen to 26, with 902 confirmed cases – 882 of which are in mainland China.

An additional 8,420 suspected cases are in quarantine and under medical observation in China, officials said.

Late on Friday evening, France declared its first two confirmed cases of the coronavirus, with one patient being hospitalised in Paris and the other in the southwestern city of Bordeaux.

French health minister Agnes Buzyn said during a press conference these were the first two cases in Europe, adding it was likely other cases would arise in the country.

Confirmed cases have also been detected in Thailand, Singapore, Hong Kong, Macau, South Korea, Japan, Vietnam, Taiwan and the United States, in patients who had travelled from China.

The majority of the deaths have occurred in or around Wuhan in Hubei province in central China, but two fatalities have been confirmed in the past two days outside the epicentre, in Hebei and Heilongjiang.

As reports surfaced of bed shortages and designated hospitals in Wuhan unable to handle the massive volume of patients, authorities announced on Friday that construction had begun on a new 1,000-bed prefabricated quarantine and treatment centre.

State media broadcast footage of scores of excavators and trucks on the 25,000 sq m site that officials pledged would be a functional hospital by February 3rd.

Several hospitals and clinics at the centre of the outbreak have made urgent appeals for surgical masks, gloves, goggles and disposable garments.

“We have a severe shortage of medical supplies. We urgently request your help,” one children’s hospital in Wuhan said in a social media post requesting donations.

The People’s Liberation Army said on Friday it had sent 40 army doctors to Wuhan already to support the local hospitals and more would follow, while the central government announced it was sending two planes loaded with 32 tonnes of medical supplies to the stricken city.

On Friday, the authorities expanded a travel lockdown to another 12 cities near Wuhan, affecting about 40 million people in the shutdown.

Residents in the area have been told not to leave except for exceptional circumstances, and road blocks have been set up with temperature checks. Most air and rail services into and out of the region have been suspended, as have public bus, subway, ferry and taxi services.

All across the country events and public gatherings have been cancelled, including celebrations to mark the Lunar New Year on Saturday. Major tourist attractions have been closed to visitors indefinitely, such as sections of the Great Wall, the Forbidden City in Beijing and Disneyland in Shanghai.

Even with tight internet restrictions, many in China are questioning online whether the government’s efforts to curb the spread of the virus are too little, too late.

While the first case was detected in Wuhan on December 8th, screening measures were only introduced more than five weeks later, despite the fact experts had publicly acknowledged the new coronavirus bore a strong resemblance to the deadly Sars virus that killed nearly 800 people in 2002-03.

Local media outlets have said they were initially instructed by censors to only carry state news agency reports on the outbreak, which ruled out any independent reporting. Eight people were arrested in recent weeks for “spreading rumours” after they posted comments about the virus online.

Wuhan played host to a major Communist Party leadership meeting from January 7th to 17th, during which time there was scant reporting on the virus in the local press.

Only after the meeting concluded was the full extent of the outbreak reported, by which time many people had already left the city for the holiday period. – Additional reporting Reuters