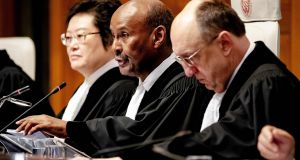 In a resounding rebuff to the personal assurances offered last month by Myanmar’s civilian leader, Aung San Suu Kyi, the International Court of Justice (ICJ) has ordered a series of emergency measures aimed at protecting the country’s Rohingya minority from the threat of genocide.

In a unanimous judgment lasting just over an hour, the UN’s highest court directed Myanmar’s government to actively prevent genocidal violence against the Rohingya, to ensure its military did likewise, to prevent the physical destruction of evidence, and to report regularly on its compliance.

The hard-hitting verdict – delivered by ICJ president Judge Abdulqawi Yusuf, without once referring to the Nobel laureate who twice gave evidence last month – concluded that the 600,000 Rohingya still living in Myanmar were “extremely vulnerable” to continuing violence by the country’s military.

The case alleging genocide by Myanmar was instigated by the west African state of The Gambia, claiming “clearances” that had forced some 750,000 Rohingya to flee to neighbouring Bangladesh in 2017 had been carried out with “genocidal intent”, and that a “real and imminent risk” remained.

The Gambia said a UN fact-finding mission had amassed credible evidence that Myanmar’s military had conducted a systematic campaign of killing, rape, torture and disappearances in an attempt to obliterate the Rohingya, who had been rendered effectively “stateless” in their own country.

For that reason, it asked the 17 judges to begin by putting in place provisional measures to protect the Rohingya Muslim population still living in fear for their lives in Myanmar – before moving on to address the substantive legal question of whether genocide had taken place three years ago.

In view of the 1948 Genocide Convention, to which both countries were signatories, said Judge Yusuf, “the right of the Rohingya group to be protected from killings and other acts threatening their existence are of such a nature that to prejudice them could cause irreparable harm”.

As recently as September 2019, he noted, the independent assessment of the UN team was that the Rohingya remained “at serious risk of genocide” – while, in the court’s view, Myanmar’s initiatives intended to promote repatriation and peace and stability in Rakhine state “do not appear sufficient”.

On that basis, he ruled, Myanmar’s government should take “all measures within its power” to prevent genocidal acts against the Rohingya, specifically, killings, acts causing serious bodily or mental harm, acts inflicting conditions of life calculated to bring about their physical destruction, and “measures intended to prevent births within the group”.

That ruling also applied to Myanmar’s armed forces and any irregular armed units, and extended to incitement to commit genocide, as well as to conspiracy and complicity. It ordered effective measures to prevent the destruction of physical evidence and the preservation of new evidence.

And – in a judicial requirement not unlike a bail condition – it ordered Myanmar to report in detail on its own compliance, initially within four months, and thereafter every six months until the substantive legal case is completed.

Even if the substantive case on genocide gets under way later this year, it could take a number of years to reach a final verdict. In addition, ICJ does not have any formal mechanism to enforce its findings.

After the judgment, The Gambia’s justice minister, Abubacarr Tambadou, described Thursday’s ruling as “a triumph for international justice”.

Because the ICJ is the world court for the resolution of international disputes, its rulings are sent automatically to the UN Security Council, where China – one of the five permanent members – is a close diplomatic ally of Myanmar.