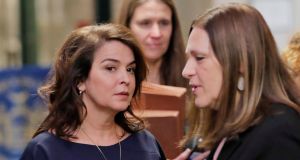 Actor Annabella Sciorra (left) arrives to testify as a witness in the case of Harvey Weinstein at New York Criminal Court during his sexual assault trial in the Manhattan borough of New York City. Photograph: Lucas Jackson/Reuters

Actor Annabella Sciorra testified that Harvey Weinstein pinned her hands behind her head and violently raped her more than 25 years ago in her apartment as prosecutors began making their sexual assault case against the former Hollywood producer.

“He had intercourse with me as I tried to fight, but I couldn’t fight anymore because he had my hands locked,” she told the New York jury of seven men and five women.

Mr Weinstein, sitting at the defence table, appeared mostly to be looking down.

He has said all of his sexual encounters with women were consensual.

The trial is a watershed moment for the #MeToo movement, in which women have gone public with allegations against powerful men in business and politics.

Since 2017, more than 80 women, including many famous actors, have accused Mr Weinstein of sexual misconduct.

Actors Ellen Barkin, Mira Sorvino and Rosanna Arquette sent Twitter messages of support to Sciorra, best known for her role in The Sopranos. Barkin was in the courtroom.

Sciorra’s allegation from the winter of 1993-94 is too old to be charged as a separate crime, but prosecutors hope it will show that Mr Weinstein was a repeat sexual predator, a charge that could put him in prison for life.

On Wednesday, Mr Weinstein’s lawyer said during opening statements that Sciorra had in the past described the encounter as consensual.

Damon Cheronis, the defence lawyer, also said Mr Weinstein could not have gotten to Sciorra’s 17th-floor apartment uninvited because her building had a doorman.

Sciorra told the jury that the evening had started with Mr Weinstein giving her a lift home from an Irish restaurant and, after dropping her off, knocked on her door and came inside uninvited.

Then, she said, he dragged her into her bedroom and pinned her hands down behind her head.

She testified that after forcing intercourse on her, he performed oral sex on her as she told him no.

“It was just so disgusting that my body started to shake in a way that was very unusual,” she said. “It was like a seizure or something.”

Sciorra told jurors that she became depressed after the incident, drinking heavily and cutting herself. She cried on the stand as she told of how she was unable to tell her family what had happened.

“I cried a lot,” she said. “I spent a lot of time alone. I didn’t see very many people. I didn’t want to talk about what happened.”

Sciorra said she saw Mr Weinstein several weeks later at a dinner and tried to confront him and told him how she fainted during the alleged attack.

She said he responded: “That’s what all the nice Catholic girls say.”

She said Mr Weinstein leaned in and said: “This remains between you and I.” Though he laughed, his tone was “very menacing”, Sciorra said.

Defence attorneys had said on Wednesday during opening statements that emails from the accusers to Mr Weinstein would show they maintained warm relations, which could undermine a case that appears to rely primarily on the testimony of the accusers.

Assistant district attorney Meghan Hast said the women kept in touch with Mr Weinstein because they “felt trapped”. She told jurors they should not discount the allegations simply because Mr Weinstein did not fit the profile of a rapist grabbing victims “in a back alley”.

“Here the rapist was at the pinnacle of the very profession his victims strived to make a career in,” she said.

The trial is expected to last six weeks. – Reuters