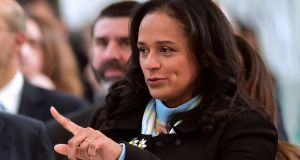 Prosecutors in Angola have accused Africa’s richest woman, billionaire Isabel dos Santos, of money-laundering and mismanagement linked to her time as chairwoman of the country’s state-run oil company, Sonangol.

Prosecutor general Helder Pitta Grós told reporters on Wednesday that Ms dos Santos (46) was among five suspects the authorities were seeking over the looting of hundreds of millions of euro in taxpayers’ money, all of whom live abroad.

Mr Grós called on Ms dos Santos, who has resided in the UK in recent years and has significant business interests in Portugal, to voluntarily return to the southern African country where she will potentially face criminal charges.

If she declined, he said, prosecutors would seek to use other legal instruments to secure her return to Angola.

Prosecutors have provisionally charged Ms dos Santos with money-laundering, fraud and mismanagement, but they will now launch a full investigation into the allegations to decide if she should face formal charges.

In a statement on Thursday Ms dos Santos denied the allegations. “The allegations which have been made against me over the last few days are extremely misleading and untrue. We will seek to clarify our position in relation to the latest accusations,” she said in a statement.

“I have always operated within the law and all my commercial transactions have been approved by lawyers, banks, auditors and regulators.”

The move to provisionally charge Ms dos Santos came four days after hundreds of thousands of files that allegedly show how she ripped off the state were released online by an award-winning investigative journalism team.

A banker with ties to Ms dos Santos was found dead on Wednesday.

Nuno Ribeiro da Cunha (45) appeared to have taken his own life in the garage of his apartment building in Lisbon, Portuguese police said in a statement on Thursday. He had attempted suicide earlier this month, the police said.

As the director of private banking at EuroBic, Mr Ribeiro da Cunha was responsible for several multimillion-dollar transfers from a Sonangol account to a company in Dubai, according to documents released by the ICIJ.

Ms dos Santos was controversially appointed chairwoman of Sonangol by her father in June 2016, the year before he stood down as the president of the oil and resource-rich nation, after 38 years in power.

However, the former president’s successor, João Lourenço, moved to crack down on corruption after becoming Angola’s leader in 2017. Ms dos Santos was removed from her Sonangol role shortly after Mr Lourenço came to power.

Investigations into Ms dos Santos’s 18-month tenure as Sonangol’s head were opened after her successor Carlos Saturnino raised the alarm about “irregular money transfers” and other irregular procedures that had come to light.

Ms dos Santos, who is known in Angola as “the princess” because of her vast wealth, has strenuously denied any wrongdoing, calling the criminal investigations into her business dealings a politically motivated witch hunt.

In a series of posts on Twitter last week, Ms dos Santos said her fortune was “built on my character, my intelligence, education, capacity for work, perseverance”.

Last month prosecutors had the Angolan bank accounts and assets owned by the businesswoman and her Congolese husband Sindika Dokolo frozen. They are reportedly seeking to recover $1 billion that Ms dos Santos and her associates are alleged to owe the state.

In recent days Portuguese authorities have also confirmed they are investigating the allegations made against Ms dos Santos.

Portuguese bank EuroBic also said this week it would end its business relationship with Ms dos Santos – who is believed to be the bank’s main shareholder – and investigate transfers worth tens of millions of euro that she made.