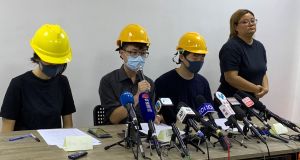 Beijing warned Hong Kong protesters on Tuesday that “those who play by fire will perish by it”, following days of havoc and anarchy caused by a general strike, numerous rallies and citywide violent clashes between demonstrators and police.

“We would like to make it clear to the very small group of unscrupulous and violent criminals and the dirty forces behind them: those who play with fire will perish by it,” Yang Guang, spokesman for the Hong Kong and Macao Affairs Office in Beijing said. “Don’t ever misjudge the situation and mistake our restraint for weakness.”

It was “only a matter of time”, he said, before it punished those behind two months of pro-democracy protests that have become increasingly violent.

Police said 148 protesters were arrested on Monday, adding that officers fired 800 rounds of tear gas and 140 rubber bullets throughout the day as more than 20 police stations came under attack across the city.

Police spokesman John Tse said they had now arrested 568 demonstrators since early June – ranging in age from 13 to 76 – and charged them with a variety of crimes, including rioting, unlawful assembly, assaulting a police officer and possession of offensive weapons.

Protesters started fires on streets on Monday, launched rocks and firebombs at police stations, and threw corrosive liquids at police officers, Mr Tse said. “Within two short months the rioters have recklessly destroyed the rule of law. Their acts have seriously hampered public safety,” he added.

While the protests initially focused on government moves to introduce a now-shelved extradition Bill that could have seen Hong Kong suspects transferred to mainland Chinese courts, it has become a wider pro-democracy movement as many feel Beijing is increasingly tightening its grip on the city. Police have become a particular target as protesters allege they have frequently used excessive force in a bid to quell the movement, a charge the police deny.

An unprecedented general strike by civil servants and private sector workers on Monday in support of the protests paralysed the city, with hundreds of flights cancelled, public transport brought to a standstill, and many offices, shops and businesses shut for the day.

Another representative of the Hong Kong affairs office in Beijing claimed there were insufficient levels of Chinese patriotic education in Hong Kong’s schools, which was an underlying cause of the protests.

“When national education is lacking, is it any wonder our young people are acting like this?” Xu Luying said at a press conference in Beijing. “Passionately loving our nation should be a fundamental value.”

Hong Kong’s youth should “link up their future with the prosperity of the nation . . . they should refrain from taking another step on this evil path,” she said, adding that it was “increasingly clear” that “foreign black hands” such as the US government were behind the protests.

During a “people’s press conference” on Tuesday, three protesters wearing their now standard uniform of yellow hard hats, facemasks and black clothes met members of the media formally for the first time, saying they wanted to counter government and police comments that condemned their actions.

After apologising to the people of Hong Kong for any inconvenience the strike and the rallies may have created, one protester, who gave his name as Jerry Chan, said, “we were forced to adopt more confrontational tactics” after several peaceful rallies that attracted huge crowds failed to win any concessions.

“We call on the government to return the power back to the people and to address the demands of Hong Kong citizens,” he said, adding that they “strongly condemn the lawlessness and the inhumane action done by the police . . . they have shown a complete lack of discipline”.

Media workers have also criticised the police for attacks on the press, and reporters covering the police press conference on Tuesday staged a brief protest to “strongly condemn police for abusing their force and obstructing the reporting by journalists”.

In a statement the Hong Kong Journalists’ Association said “the situation is growing increasingly out of control”, claiming police continued to aim high-beam lights at cameras, baton-charge journalists and fire tear gas canisters directly at them from close range.

Late on Tuesday night police fired several volleys of tear gas again to disperse a protest after they arrested the president of a university student union for buying laser pointers. More than 100 people gathered outside the Sham Shui Po police station to demand the release of Keith Fong, the president of Baptist University’s student union, who police say was found to be carrying 10 laser pointers. Protesters shine the pointers at surveillance cameras, police stations and at approaching riot police.