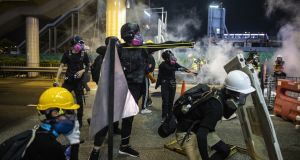 Demonstrators use slingshots to fire projectiles towards riot police on Gloucester Road during a protest in the Causeway Bay district of Hong Kong, on Sunday. Photograph: Justin Chin/Bloomberg

As tear gas fogged the central streets of Hong Kong once more this weekend – and the city braces for a general strike on Monday – Beijing issued a warning that it would “not sit idly by” and watch the mayhem in Asia’s financial hub continue to spiral out of control.

In a scene becoming commonplace over a fractious summer, riot police fired multiple tear-gas canisters on Sunday evening against masses of protesters trying to approach Beijing’s liaison office – most of whom were clad in the now standard uniform of all-black, yellow hard hats, goggles and gas masks.

The weekend saw a continued city-wide escalation of the nine-week protests, which were initially focused on an extradition Bill that might see Hong Kong citizens facing mainland Chinese court systems but then morphed into a wider movement calling for meaningful elections, and condemning police brutality and the government’s mishandling of the crisis.

In a move that will inevitably escalate the tensions, many civil servants and private sector workers have pledged to join a general strike on Monday to add support to the anti-government movement.

Suggesting Beijing is losing patience with the activists, on Sunday China’s official news agency Xinhua wrote that the “central government will not sit idly by and let this situation continue”, while the Hong Kong government website said the city was reaching a “very dangerous” point and violent protesters’ actions now “crosses the line”.

After a mass march surrounded a Kowloon police station on Saturday night several protesters rained bricks down on the complex and used long metal poles to smash the windows of the police officers’ private cars parked inside the compound. Some of the bricks thrown into the barracks were lobbed back across the wall into the darkness and crowds outside. Traffic lights in the area were all sabotaged by protesters in an effort to cause maximum chaos on Monday when the call goes out for a general strike.

Riot police emerged from the station after several hours under siege, dispersing crowds with tear gas and arresting more than 20 protesters.

Over the weekend protesters have been calling for people to join the strike on Monday, led by civil servants. The government has threatened “serious repercussions” for employees of the state if they do not turn up for work but a 40,000-strong rally on Friday suggested there was wide support for the action.

In an act that Chinese state media said was “playing with fire”, a group of Hong Kong pro-independence activists threw a Chinese flag into Hong Kong harbour on Saturday night after the rally. The former chief executive of Hong Kong, CY Leung, offered a HK$ 1 million reward to help identify the people responsible.

While a minority of the protesters are now intent on violent or radical action to draw attention to their cause, the majority of the people taking to the streets each day are very peaceful – and incredibly well organised. They erect pop-up stalls offering supporters helmets, food, drinks, emergency medical care and face masks to avoid being identified by the omnipresent surveillance cameras. Counselling services are also readily available for people in the crowd who feel depressed or suicidal.

Hong Kong continues to function in its trademark efficient manner despite the unprecedented social unrest. When pockets of the city are cordoned off and thronged with protesters and riot police – and clouded with tear gas – the next street up the territory tends to operate as smoothly as ever. Locals – most of whom seem to have a very well-informed opinion on the latest developments – press on with the daily routines.

“We are Hong Kongers. Politics, no politics: we make money or we die,” said YK Lau, a restaurant worker in Kennedy Town, as he watched tens of thousands of young protesters passing by on Sunday.