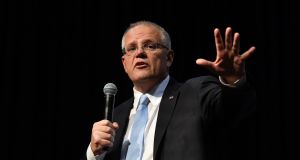 Australia’s federal election is two weeks away, but about half a million people have already cast their ballot. The opposition Labor Party says it’s because the public is in a hurry to get rid of the government, but this may be wishful thinking.

The latest polling shows Labor with a slender 51-49 lead over the Liberal-National coalition after preferences. Given Labor had a 56-44 lead in March, momentum is with the government.

Voting is compulsory, so those working or away on May 18th – the official polling day – can vote up to three weeks early. A third of the electorate is expected to vote before election day, but 11 of the people on the ballots have been disendorsed by their parties since the ballot papers were printed.

They lost their parties’ backing mainly because of racist, homophobic or sexist comments posted online coming back to haunt them. But with their names on the ballot they could still get elected, as Pauline Hanson did in 1996 after being disendorsed by the Liberals for comments she made about Aboriginal people.

Hanson is still around, and leads the far right One Nation. She has disendorsed Steve Dickson from the party’s Senate ticket after he was secretly filmed in a strip bar, where the most printable of his comments was “I’ve had more Asian than I know what to do with”. Hanson said this crossed the line.

But it was an odd place for her to draw the line, given Dickson had previously been exposed on the same trip to Washington for meeting with the National Rifle Association, getting tips on how to generate positive publicity from mass shootings and seeking gun-lobby donations.

For the first three weeks after the election was called, the public took little notice. The one group impossible to avoid was the United Australia Party, run by and for controversial business man, and self-proclaimed billionaire, Clive Palmer. UAP has already spent AU$30 million (€19 million) on advertising and plans to spend another $40 million. Spend a few minutes online or watch commercial television station and you will see a UAP ad.

Palmer previously served in parliament from 2013-2016, where he often did not show up and was prone to falling asleep when he did. A preference swap deal with the coalition all but guarantees him a return to parliament.

But while he’s spending $70 million to give democracy a helping hand, Palmer also owes the government $70 million for the redundancies it paid to his former employees in a company that collapsed in 2016 with debts of $200 million, costing 800 jobs. Workers who were not covered by the government’s entitlements guarantee (because they were not employed long enough) are owed $7 million by Palmer. He says he will pay that in full – after the election.

A week into early voting, the parties have upped the tempo and the negativity. The first leaders’ debate between prime minister Scott Morrison and Labor leader Bill Shorten was held in Perth, which is two hours behind the eastern states where most of the population lives, and was shown on a minor digital channel. About 350,000 people watched, but more than a million watched the Lego Masters game show the same evening.

Shorten lambasted Morrison for a preference swap deal the coalition did with One Nation. Morrison said he was a Liberal and the deal was done by the Nationals, which is a separate party. He was being economical with the truth. In Queensland, the parties merged in 2008 and operate as the Liberal National Party, and in the Northern Territory they operate jointly as the Country Liberal Party.

The studio audience, and many commentators, said Shorten won the debate. Some pointed out that while Shorten spoke about Labor’s broad policy agenda on taxation, health, education, housing and more, Morrison also spoke mostly about Labor’s agenda.

His pitch to the public rarely moved beyond a plea to “vote for me, I’m not Bill Shorten”. In the past quarter century it has been customary for Australian oppositions to run a “small target” campaign which is short on specifics, while the government talks about its agenda. In 2019, the roles have reversed.

Despite narrowing polls, Labor is still expected to win, not least because the government is a minority one after a defection and a byelection loss. Some are calling it an unlosable election.

But Labor is all too aware of what happened in 1993, the last time an opposition had such an ambitious policy agenda. That election was also supposed to be unlosable for the then opposition Liberal-National coalition. But they lost.