Conservatives lose over 1,200 council seats as they bleed votes in all directions

Labour drop votes in both Leave and Remain areas, suggesting its attempt to straddle both sides on Brexit is not working with voters 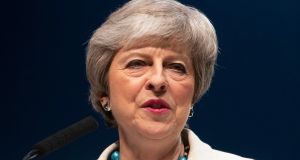 As they sought to manage expectations ahead of Thursday’s local elections in England, Conservatives put it about that they could lose up to 1,000 seats. Privately they were confident that the losses would be a few hundred lower as voters drew back from punishing local councillors for the party’s actions in national government.

In the end they lost more than 1,200 council seats, ceding control of more than 40 councils as they bled votes in all directions – to the Liberal Democrats, Independents, Greens and Labour. But it could have been much worse if Nigel Farage’s Brexit Party had registered in time to contest the elections.

Farage’s party will be on the ballot for the European Parliament elections on May 23rd, and one poll this week put them on 30 per cent, with the Conservatives on just 13 per cent.

The recent collapse in Conservative support was first seen in polls after March 29th, the day Britain was due to leave the EU. Few in the party doubt that it will get worse until Brexit is delivered.

Theresa May’s best hope of passing the EU-UK withdrawal agreement lies in agreeing a compromise with Labour over issues including a customs union. And Jeremy Corbyn interpreted the disappointing result for his party as a message from voters to get on with agreeing a deal.

Labour fared much less badly than the Conservatives, but it lost votes both in Leave and Remain areas, suggesting that its attempt to straddle both sides on Brexit was no longer working with voters.

MPs and activists who want Labour to back a second referendum on Brexit dispute Corbyn’s interpretation of the results, pointing to big gains by the anti-Brexit Liberal Democrats and Greens, while Ukip lost most of its seats.

Negotiations between the government and Labour resume next Tuesday after both sides said this week that they were moving closer on the issue of customs arrangements.

Downing Street suggested a few days ago that the talks could reach a conclusion next week, but Whitehall sources suggested on Friday that they could continue for a few days longer.

This timetable means that a deal cannot be passed in time to avoid participating in the European Parliament elections, when both the Conservatives and Labour could lose votes to the Brexit Party and the pro-Remain parties. The government hopes that such losses will deliver the shock MPs on both sides need to resolve Brexit, even if it means voting for a deal few of them like.