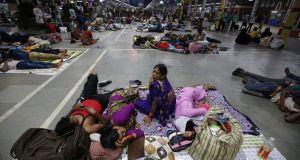 Stranded passengers rest inside a railway station after trains between Kolkata and Odisha were cancelled ahead of Cyclone Fani, in Kolkata, India. Photograph: Rupak De Chowdhuri/Reuters

Cyclone Fani, one of the strongest storms to batter the Indian subcontinent in decades, made landfall near Puri, India, on Friday morning, lashing the coast with winds gusting at more than 190km/h.

By Friday night, the storm was over coastal Odisha, according to India’s Meteorological Department, and was expected to weaken.

Tens of millions of people are potentially in the cyclone’s path, and more than a million were evacuated this week from coastal areas. Large sections of coastal India and Bangladesh are threatened by storm surges, and heavy rains could cause rivers to breach.

The fast-moving storm struck the coast as the equivalent of a Category 5 hurricane. Several hours after it made landfall, the cyclone was downgraded to a “very severe” storm from an “extremely severe” storm.

By Friday night, the full impact of the storm was still being assessed according to local officials. India’s coast guard said on Twitter that emergency workers had started providing aid within the first hour of the storm making landfall. But some relief efforts were hampered by extensive damage.

Many large trees were uprooted and toppled on to roads in Puri district, according to a government spokesman, but road restoration work had already begun by Friday night. Phone lines, internet and electricity were all down in the city, but the government vowed to have services running again soon.

At least 160 people were injured by the storm, the government spokesman said. The military conducted aerial surveys Friday evening to assess the damage, and at least four ships with aid supplies were stationed in affected areas, the navy said on Twitter.

A relief official for the state of Odisha, where the cyclone made landfall, said many trees had been uprooted and houses destroyed, and that there had been unverified reports of deaths. The official, Pravat Ranjan Mohapatra, said the situation would be clearer in a few hours. NDTV, a major Indian news network, reported that three people had been killed.

Along India’s coast, streets were largely empty as residents heeded warnings from the India Meteorological Department to stay indoors. “In Bhubaneswar, we are all indoors,” said Jagdish Chandra Rout, head of communications for Gopalpur Port Limited. “Nobody is visible on the road, nothing is moving on the road.”

Mr Rout said he felt the area was much better prepared for the storm than in 1999, when more than 10,000 people died in a cyclone. “We feel that yes, we may have some difficult days ahead, but no panic,” he said. “We are prepared, we know what is coming when and where.”

Video verified as having been taken in Bhubaneswar that was shared widely on social media showed a wind-whipped crane collapsing on a nearby building. Others in the city described scenes of destruction. Kalpataru Behra (25), who lives in a roadside shanty in Bhubaneswar, said that his house and the small snack shop he runs were both seriously damaged by the storm, and that his house was flooded on Friday.

“Tonight we plan to sleep in a community centre,” he said. “It is difficult to rebuild. We don’t have money in hand.”

The Indian authorities enaged in a major evacuation programme from parts of the nation’s eastern coast this week. Using television, loudspeakers, radio and text messages to warn residents about the dangers of the storm, India’s disaster relief agency and meteorological department warned of the “total destruction” to thatched huts in some districts, major damage to roads, the uprooting of power poles and the potential danger from flying objects.

The cyclone is forecast to drop as much as eight inches of rain on northern parts of the state of Andhra Pradesh and on the state of Odisha. Schools have been closed, fishermen asked to keep off the water and tourists urged to leave the city of Puri, a Hindu pilgrimage site where an elaborate, centuries-old temple could be at risk of severe damage. Airports in the cyclone’s path were closing and hundreds of trains have been canceled.

Along Odisha’s coast, more than 850 storm shelters have been opened, said Bishnupada Sethi, the state’s special relief commissioner. Each can hold about 1,000 people, along with livestock. “People are reluctant to leave their homes, though, which is problematic,” Mr Sethi said on Thursday.

In Bangladesh, as the storm approached on Friday the government said it had evacuated half a million coastal residents to shelters. –New York Times