Party sheds more than 1,200 seats with most going to resurgent Liberal Democrats 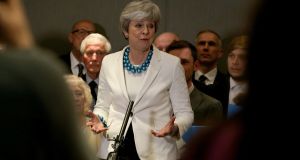 “I think there was a simple message from yesterday’s elections to both us and the Labour Party – just get on and deliver Brexit.” Photograph: Nigel Roddis/PA Wire

Theresa May faced renewed calls to resign on Friday night after the Conservatives lost more than 1,200 seats in local elections in England, losing control of more than 40 councils. The prime minister was heckled as she spoke to Welsh Conservatives, as a party activist shouted “why don’t you resign?” and “we don’t want you”.

Veteran backbencher Michael Fabricant described Mrs May’s leadership as a cancer in the party that had to be removed before it could recover. “The cancer in the Conservative Party must now be excised so that the party can revive in time for our conference at the end of September with a new leader and clean break from the EU. The Withdrawal Agreement is unlikely to achieve this with its ties to Brussels,” he said.

The Conservatives lost seats throughout the parts of England where the elections were held, losing control of councils including Peterborough, St Albans and Basildon.

“These were always going to be difficult elections for us with us nine years into a government. Of course there is the added dimension we haven’t got the Brexit deal over the line,” Mrs May told Sky News.

“But of course it wasn’t a good night for Labour either – they were predicting they would make gains but they have lost over 100 seats. I think there has been a very clear message from people to both main parties that they want us to get on and deliver Brexit, so I welcome comments from Jeremy Corbyn that he thinks we should be working to ensure we can deliver a deal.”

Labour had hoped to gain at least 400 seats but instead lost dozens and lost control of a number of councils, including Bolsover in Derbyshire, the political base of long-serving MP Dennis Skinner. The party lost seats both in parts of the country that backed Brexit in 2016 and in places that voted to remain in the EU.

Labour MPs who favour a second Brexit referendum claimed the party was paying the price for its ambiguous policy and for working with the government to agree a common approach to Brexit.

The Liberal Democrats made big gains, recovering much of the ground they lost in 2015 when voters punished them for their role in coalition with the Conservatives.

The Liberal Democrats gained more than 600 seats, more than doubling the number of councils under their control. The Green Party, which also favours a second referendum, increased its number of council seats from a few dozen to almost 300 in its best ever result.

Neither Nigel Farage’s Brexit Party nor the anti-Brexit Change UK formed by MPs who defected from the Conservatives and Labour, contested the local elections but they will take part in European Parliament elections on May 23rd.

Environment secretary Michael Gove said voters were clearly angry about the impasse over Brexit and had sent the same message to both the Conservatives and Labour.

“I think, in a way, that whatever else one takes from these local elections – and there are reasons for sadness when good councillors lose their seats – one lesson that we can take is that the electorate has pretty clearly said to both major parties: ‘Get on with it’. My view is that the message is more acute for Labour because the overwhelming majority of Conservative MPs have supported the prime minister but only a tiny fraction of the Labour Party have. But the responsibility rests on all us in Westminster to respect that result,” he said. – Additional reporting: PA