Spain will not remove Venezuelan opposition figure from its embassy 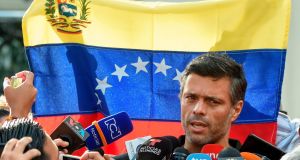 Spain has said it will not hand over a leading Venezuelan opposition politician who escaped house arrest to help launch an abortive uprising, then sought refuge at a Spanish diplomatic compound and gave a press conference from its gates.

Leopoldo López claimed to have spoken to mid-ranking military officers in recent weeks, who told him they were privately committed to ousting the embattled president, Nicolás Maduro. He also said on Friday that a military intervention in Venezuela would be “constitutional”, and he considered it an option for the opposition.

His comments, in an interview with the Spanish news agency EFE, came before the opposition leader, Juan Guaidó, announced a new wave of protests for Saturday. “We will continue in the streets,” he said, calling for demonstrators to gather “in peace” at all the main military units across the country.

Mr López, who is Mr Guaidó’s political mentor and stood beside him as he tried to trigger a wave of military defections on Tuesday, is unlikely to join the protesters, as the supreme court has put out a warrant for his arrest.

The country has been in limbo since Mr Guaidó posted a pre-dawn video on Twitter, calling for a popular and military uprising against the regime. Thousands of protesters answered his call, but Venezuela’s military did not. Maduro remains in power and senior commanders and ministers have publicly pledged loyalty to him.

Demonstrations have continued around the country, however, with Venezuelan human rights groups saying five people have been killed and at least 200 injured. In a possible reflection of government concerns about fractured loyalties, and hawks in the US monitoring the situation, the administration has not moved against Mr Guaidó.

US president Donald Trump has vowed to do everything short of “the ultimate” to resolve Venezuela’s crisis.

Senior US officials have alleged three senior Venezuelan officials were involved in plotting against Mr Maduro, and were in advanced talks with the opposition, when Mr Guaidó was forced to bring forward the coup attempt, leading to its failure.

Mr López, a former municipal mayor in Caracas, suggested the military’s loyalty was not yet assured. Having been detained in 2014 for leading protests against Mr Maduro’s rule, he said five years surrounded by security forces had given him an insight.

“For more than three weeks, I had meetings in my home where I was held under house arrest,” Mr López told reporters on the steps of the Spanish ambassador’s residence on Thursday.

“I met with commanders, I met with generals, I met with representatives of different units of the armed forces and the different branches of the police, and we agreed to put an end to the usurpation [by Mr Maduro]. – Guardian