May under pressure to quit as Conservatives leader after losing more than 1,000 seats 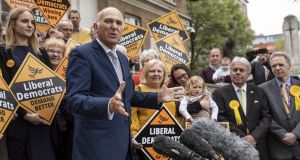 Vince Cable has hailed his Liberal Democrats party as “the big winners” of the local election, with the party gaining hundreds of seats and a series of councils.

At that point in the counting, the Conservatives had lost 1,048 seats, and Labour 72, while the Greens had gained 153 seats and independents 183.

However, the Liberal Democrats’ success should be put in the context of disastrous results the last time the same areas were fought.

Among the areas taken were the traditional Tory stronghold of Cotswold district council, where they overtook the Conservatives to become the biggest single party, winning 18 of the 34 seats.

Arguably more striking was Bath and north-east Somerset, where the Lib Dems gained 23 seats to easily overturn the previous Tory majority, winning 37 of the 59 seats – including the home ward of Tory Brexiteer MP Jacob Rees-Mogg.

As the results came in, Mr Cable opted to travel to Chelmsford in Essex, where his party overturned a previous 45-seat Conservative majority, amassing a net gain of 26 seats, while the Tories lost 31.

The party also gained Winchester, Vale of White Horse, Hinckley and Bosworth, North Devon and North Norfolk. They also took the newly-formed authority of Somerset West and Taunton, formed by the merger of two other councils.

Mr Cable told celebrating Liberal Democrats activists that the result reflected a “story across the country”. He said: “The Lib Dems were written off at one point but we’re coming back very, very strongly. We’re the big winners of the night throughout the country.”

Mr Cable added: “Today’s Lib Dem surge is a springboard to the European elections, where we are clearly the strongest remain force on the ballot paper. Every Liberal Democrat vote on May 23rd will be a vote to stop Brexit. ”

However, the result seemed to have a broader impetus than just Brexit, with analysis showing the party only did slightly better in remain-voting areas than those which supported leave in 2016. Chelmsford, perhaps the most dramatic Lib Dem gain, supported leave in the referendum.

The other context is that the Lib Dems had been widely expected to gain seats given than the last time the same councils were fought was May 2015, when the party was being roundly punished by voters following the Conservatives-Lib Dem coalition.

Then, the Lib Dems lost more than 400 seats and four councils. In the general election on the same day the party slumped from 57 Westminster seats to eight.

Meanwhile, Conservative councillors and MPs have called for prime minister Theresa May to step down after the party lost more than 1,000 seats.

Council leaders called for the prime minister to consider her position while others said they had made gains despite the government’s paralysis since the 2016 EU referendum. A heckler interrupted Mrs May as she gave a speech in Wales, saying: “Why don’t you resign? We don’t want you.”

The Conservative group leader, Tony Berry, said it was a “very unusual set of circumstances” because of Brexit and “professional politicians who are basically working for themselves rather than necessarily what is best for the country”.

Delivering a message to the prime minister, he said: “I would ask her to consider her position very carefully.”

In Bath and North East Somerset, where Tory losses included the council leader, Tim Warren, who said councillors had been “given a kicking for something that wasn’t our fault”.

Asked whether there needed to be changes in leadership or policies at the top of the party, Mr Warren replied: “There needs to be a change in action.”

A succession of pro-leave Tories called on Friday morning for Mrs May to step down. The MP Crispin Blunt said the party needed to replace Mrs May with a new leader.

In a rare piece of good news for Mrs May, the Conservatives took control of Walsall council after winning seats from Labour, having run the authority for a year without a majority.

The council leader, Mike Bird, said they had won “despite” the Conservative government and Theresa May.

“She hasn’t helped us make any gains at all – far from it – we made the gains despite the prime minister,” he said.

Despite some predictions that Jeremy Corbyn’s party could pick up three-figure gains, Labour were unable to capitalise on the Conservatives’ struggles. Labour was down more than 70 seats, though it did have the consolation of restoring control in Trafford for the first time sine 2003.

Mr Corbyn said there was now a “huge impetus” on every politician to “get a [Brexit] deal done . . . Parliament has to resolve this issue. I think that is very clear.”

One crumb of comfort for Mr Corbyn was a stroke of luck in Bradford where Labour’s Kausar Mukhtar was elected ahead of the Green Party’s Matt Edwards after the drawing of lots. – Guardian/PA