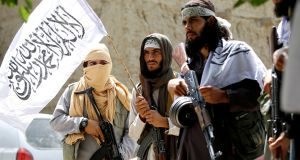 Taliban celebrate ceasefire in Nangarhar province, Afghanistan in June 2018: Pakistani officials confirm early talks have begun between the Taliban and US. Photograph: Parwiz

US officials have met their Taliban counterparts at least twice in the past three months, according to intermediaries who helped set up the meetings, as Washington looks to reboot peace talks that could finally end America’s longest war.

Officials in Pakistan said they helped arrange the meetings in Qatar, where the Taliban has a political office, confirming separate reports from unnamed Taliban officials that talks had begun.

One senior official in Islamabad said Pakistan had given the Taliban safe passage to travel via their country to Qatar. “We knew that the Taliban were heading to meet with the US in Qatar and the Americans also knew they were coming [this way] ,” said one.

A second person involved in facilitating the talks said: “Even if the Americans say in public that Pakistan is not doing enough [for restoring peace] in Afghanistan, they [the US] know very well that Pakistan is playing a helpful role.”

US president Donald Trump last year announced a fresh military push in Afghanistan, committing thousands more troops in an effort to shore up the Afghan security forces, which have been under severe pressure in recent years from insurgents.

According to a report in the New York Times, the military strategy is not intended to take control of the whole country, however. US officials told the paper that US-backed Afghan troops will instead retreat from more sparsely populated areas and focus on protecting key urban centres such as Kabul.

The US has said that it wants to encourage peace talks with the Taliban alongside the military push, but has always insisted these should be between the Taliban and the Afghan civilian government, not the US. The Taliban has said it will only talk to the US.

Despite these public statements, Pakistani officials have confirmed early talks have begun between the Taliban and the US that might eventually lead to a peace agreement.

The US state department did not comment on whether the talks had occurred. But a spokesperson confirmed that Alice Wells, the top US diplomat for South Asia, had recently travelled to Qatar, where she met Qatari ministers and officials to talk about progress towards an Afghan peace process.

“The United States is exploring all avenues to advance a peace process in close consultation with the Afghan government,” the spokesperson said. “Any negotiations over the political future of Afghanistan will be between the Taliban and Afghan government.

“We do not have any other meetings to read out at this time.”

The Qatar meetings are the first time serious progress has been made towards peace with the Taliban since 2015, when meetings were held between Afghan and Taliban officials in Pakistan, in the presence of both the US and China.

Those talks fell apart, however, after Kabul announced that the Taliban leader Mullah Mohammed Omar had been dead for more than two years. – Copyright The Financial Times Limited 2018