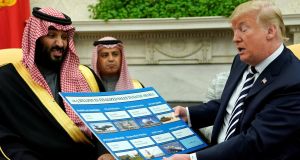 Saudi Arabia’s King Salman has said the kingdom will not accept any regional peace plan that fails to address the status of Arab territory occupied by Israel in 1967, particularly East Jerusalem, and the right of return of Palestinian refugees and their descendants.

He has reiterated Riyadh’s commitment to the 2002 Saudi peace plan which calls for full Israeli withdrawal from Arab territory captured in 1967 in exchange for normal relations with the Arabs.

The king has made his country’s position clear in public statements, assurances to Arab leaders, and during talks with Palestinian president Mahmoud Abbas, who has rejected the Trump administration’s “deal of the century” to end the Arab-Israel conflict.

He told Mr Abbas: “We will not abandon you . . . We accept what you accept and we reject what you reject.” There have been no negotiations between Palestinians and Israelis since 2014 due to Israel’s settlement expansion and refusal to discuss Jerusalem.

The king has reasserted control over Saudi policy on the Palestinian issue after his favourite son and heir, Crown Prince Mohammed bin Salman (32), appeared to shift from the kingdom’s traditional stance following meetings with US president Donald Trump’s son-in-law Jared Kushner, co- author of the US plan.

Prince Mohammed gave the false impression Riyadh had changed its policy in an interview where he said Israelis as well as Palestinians “have the right to have their own land”.

King Salman countered this statement by saying Saudi Arabia remains “steadfast” in support of the Palestinian cause.

Although Mr Kushner’s plan has not been made public, leaks reveal the US proposes limited Palestinian autonomy in West Bank urban enclaves, a capital in the town of Abu Dis near Jerusalem, continued Israeli settlement activity on land designated for the Palestinian state, no repatriation of refugees, and economic advancement for Gaza, which would come under Egyptian control.

Arab commentators accuse Mr Kushner, who has close family and commercial ties to Israel, of abandoning the “two-state solution” and adopting Israel’s claim to all Jerusalem and more than 60 per cent of the West Bank. Palestinians demand a state with East Jerusalem as its capital, an end to the Israeli occupation of the West Bank and Gaza, and the return of refugees.

King Salman has no option but to adhere to his country’s longstanding policy. Saudi Arabia is the birthplace of Islam and he styles himself the custodian of the faith’s two holiest cities, Mecca and Medina. To repudiate the kingdom’s own peace plan would alienate both Arabs and Muslims opposed to Israel’s control of al-Aqsa mosque in Jerusalem, the third holiest site in Islam, and Israel’s rule over Palestinians.

Mr Kushner and his team had, apparently, believed Saudi Arabia could press Arab and Muslim rulers into accepting the plan, although this was never possible as they would face the wrath of their citizens.

Capitulation to the plan by Riyadh would also open the door to Tehran, Saudi Arabia’s rival in the region and the Muslim world, to become the champion of the Palestinian cause, a role Iran has with little success attempted to assume since the 1979 Islamic revolution.