Robert Mugabe claims he will vote against former party 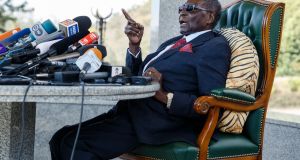 Former Zimbabwe president Robert Mugabe has delivered a stinging blow to the ruling party ahead of Monday’s general election, saying he will not vote for its candidate in the country’s presidential poll.

In a surprise news conference called on Sunday in Harare, just hours before Zimbabweans go to the polls to elect a new president and parliament, the 94-year-old deposed dictator said: “I cannot vote for those who tormented me”.

Mr Mugabe resigned as Zimbabwe’s president last year after a military takeover prompted the ruling Zanu-PF party, which he led for four decades, to force him out of office. Zanu-PF MPs threatened to impeach him if he refused to stand down.

Mr Mugabe was succeeded by his former confidant and deputy, Emmerson Mnangagwa as the country’s interim leader. He is now Zanu-PF’s candidate in the race to become Zimbabwe’s new president.

“For the first time we have now a long list of aspirants to power. I will make my choice among the other 22 [presidential candidates] but it is a long list,” a frail Mr Mugabe said at his Blue Roof private residence in the capital.

The effect his announcement will have on an electorate that largely despises him remains unclear, but his utterances are a huge embarrassment to the former liberation movement he led for more than four decades.

Mr Mnangagwa and Movement for Democratic Change (MDC) leader Nelson Chamisa are the frontrunners in a presidential race that appears to be neck-and-neck, according to recent election surveys. The latter is heading an alliance of five opposition parties.

When asked by reporters whether he now wished Mr Chamisa well in the poll, Mr Mugabe responded: “He seems to be doing well, and if he is elected I wish him well”.

However, he denied recent reports that he had helped Mr Chamisa during his election campaign.

Mr Mugabe went on to say that he hoped the military would be removed from government for good after Monday’s vote. Following the military takeover in November some of the generals involved were appointed to Mr Mnangagwa’s cabinet.

“Let tomorrow be the voice of the people to say never again shall we experience a period where the army is used to thrust one person into power,” he said.

More than 5.6 million Zimbabweans are registered to vote in the general election, which is the first national poll in 38 years that Mr Mugabe is not involved in.

If Zanu-PF is defeated in the election it would be the first former liberation movement in southern Africa that ended colonial rule in its country to lose power.