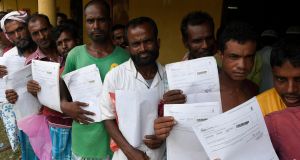 Villagers wait outside a National Register of Citizens verification centre in Morigaon district of Assam, India, on Monday. Photograph: EPA/STR

About 4 million people who live in the Indian border state of Assam have been excluded from a draft list of citizens, as Bengali-speaking Muslims fear they will be sent to detention centres or deported.

The state government has put stringent security in place while the chief minister, Sarbananda Sonowal, has told Indian media that those finding themselves stateless overnight should not worry. Mr Sonowal said they would be given a chance to prove their claim of citizenship, that none of the 4 million would be sent to a detention camp, and that “no one will be treated as a foreigner”. Mr Sonowal told the Hindustan Times that “ample opportunity will be given to applicants to prove their eligibility”.

Hundreds of thousands of people fled to India during Bangladesh’s war of independence from Pakistan in the early 1970s. Most of them settled in Assam, which has a 270km border with Bangladesh.

The list aims to identify every resident who can demonstrate roots in the state before March 1971. The mammoth three-year-long exercise to prove the identities of 33 million people across the hills, valleys and plains of this verdant state began two years ago. It has been overseen by the supreme court.

There have been longstanding social and communal tensions in the state, with locals campaigning against illegal immigrants – a fight championed by the Hindu nationalist-led government of the prime minister, Narendra Modi.

In 1983, scores of people were killed by machete-armed mobs intent on hounding out Muslim immigrants.

Some residents say the demography of the state has been altered by illegal Muslim migrants and resent this. Many Muslim residents angrily reject the charge of being illegal, saying that not only they, but their grandparents, were born in Assam and they know of no other place.

Every resident’s papers and antecedents have been checked. The first draft of the list was published on January 1st, listing 19m names. Since then, more claims have been verified and more names added to the register.

However, the final register will only be complete once the 4 million people have appealed against their exclusion from the list and had a chance to prove their claims to citizenship.

The Guardian reported in February that Assam was building a new detention centre to process the “foreigners” who will be evicted in the coming years.

The human rights activist Harsh Mander, a member of the National Human Rights Commission in New Delhi, visited a detention centre in January. He said he was devastated to see families separated and people kept in “jails” indefinitely, some of them over many years.

“There was a mounting sense of fear of the future among those I met. My own trepidation is that if thousands of people deemed to be ‘stateless’ can be kept like this, what’s going to happen when its millions? Will we see concentration camps?” asked Mander.

On Wednesday, the federal home minister, Rajnath Singh, said he had ordered the Assam government not to take any action against those whose names do not appear on the register. In parliament on Monday, Mr Singh told MPs there would be no deportations based on the register and said there was no need to create “unnecessary panic”.

For its part, the Assam government has been publicising what steps the 4 million not on the list need to take to rectify the situation. But the fundamental issue for many is that they simply do not have documents dating back decades.

“Many are poor illiterate families who do not have relevant papers to prove how long they have lived in the state. Saying they will be a given a chance to prove their citizenship is easy but doing so isn’t so easy for them,” said social activist Prashant Bora from Guwahati, the capital of Assam.

Meanwhile, the neighbouring states of Meghalaya, Manipur, Arunachal Pradesh and Nagaland have strengthened their security with Assam out of fear that panic-stricken residents not on the list may cross over to them. – Guardian