Mnangagwa and Chamisa in tight race as Zimbabwe goes to polls 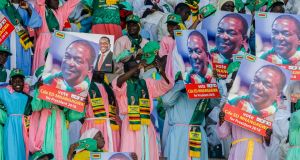 Supporters cheer as they attend the last campaign rally of Emmerson Mnangagwa, Zimbabwe’s presidential candidate for the Zanu-PF party, at the National Sports Stadium in Harare. Photograph: Jekesai Njikizana/AFP/Getty Images

On Saturday, they gathered in large numbers at the final election rallies in the capital Harare of the two frontrunners competing to become Zimbabwe’s next president, to publicly back them one last time before ballots are cast.

Movement for Democratic Change (MDC) leader, Nelson Chamisa, a charismatic and energetic 40-year-old lawyer leading an alliance of opposition parties, assured his supporters at Freedom Square that the vote was already won. At the same time, Zimbabwe’s interim president and Zanu-PF leader Emmerson Mnangagwa wound up his campaign at a near-full 60,000-seater National Sports Stadium by saying the future economic prosperity they desire was within reach. Even though both sets of supporters gathered in close proximity to each other, the day was free of violence. However, Zimbabweans who spoke to The Irish Times at each event insisted their party would emerge victorious, and if it did not, they would “defend their vote” in the days ahead.

Although there are 23 candidates vying for the presidency, most people believe the real contest is between the 75-year-old Mnangagwa, a party hardliner, and the youthful Chamisa, who only become eligible to run for office on his last birthday.

The latest election survey by research company Afrobarometer on who Zimbabweans want as their next leader put a slim three percentage points between the pair, with Mnangagwa backed by 40 per cent and Chamisa 37 per cent of the 2,400 people polled. In total the survey revealed that 20 per cent of interviewees were undecided. With the race so tight coming into the final stretch, both candidates went all out to urge their supporters to convert undecided voters to their cause. During his address Mnangagwa promised that a new future was on the horizon if Zanu-PF was returned to power.

“What is wanted now is one push to have the most thunderous victory in the history of this country. Today, we unlock the potential of our beloved homeland to build a new Zimbabwe for all,” he said.

Zanu-PF supporters willing to talk to freely scoffed at the notion that Chamisa could win Monday’s poll, with many saying the MDC leader was too young, inexperienced and brash to rule the nation.

Hendwick Gamse (60) from Mbare insisted the Zanu-PF leadership renewal that saw Mnangagwa replace Mugabe in November after he was ousted from power, was the change the country needed. “Mnangagwa is a very different man to Mugabe. He knows what the economy needs; he is not racist; and he cares for the poor. I urge every undecided voter to come home to Zanu-PF,” she said.

Seán Lakalala from Harare said he would never accept a MDC victory because the party had advocated for international sanctions against Zanu-PF. “We are now reinvigorated by Emmerson. He is the man investors want to see in power, so we need him.”

A couple of kilometres away, the MDC alliance’s last rally, which had a strong youth contingent, drew a much bigger crowd than Zanu-PF’s. Chamisa said in his address that if Zimbabweans missed Monday’s opportunity, the country would be doomed for the foreseeable future.

“On Monday, the people are voting for change, for the new, for the young and for genuine change. Three-quarters of the people in the rural areas have now seen light,” he said, before adding there would be no run-off as “we have won this already”.

Under Zimbabwe’s electoral laws if no presidential candidate gets more than 50 per cent in the first round of the vote, the top two go head-to-head in a second-round run-off for the presidency. MDC supporter Kamidza Kudakwashe maintained his future was reliant on a victory for the opposition alliance because it was the only way he believed he would get a job.

“I have never had a job despite having a master’s degree. Many of the young people you see here have been to university but they cannot find work. That is our major frustration, and that is why we cannot lose this poll.” he explained.

The 30-year-old went on to say that more than an election between political parties, this was a fight between the young in Zimbabwe, who have nothing, and the older generation who have benefited from Zanu-PF’s patronage system. “The youth will vote in large numbers on Monday. If it is free and fair we will win,” he insisted. Moud Chinyerere (53) said that if the MDC did not win then it would be because Zanu-PF had rigged the election again. “If they do that we will defend our vote using peaceful protests,” she said. However, many other MDC supporters said they would be willing to “fight for our future” and “go to war”. Under such circumstances there would be no winners at all.