‘This is an emergency’: Bomb scare on flight dwarfed by Burundi’s crises 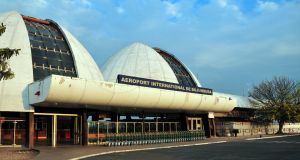 Bujumbura International Airport: Sally Hayden’s flight was diverted there when a man locked himself in the bathroom, claiming to have a bomb. Photograph: M Torres

The aircraft was already on the ground when the pilot made the announcement. “This is an emergency,” he said, his voice unnaturally high-pitched. He told us to stay in our seats. “You’re not in danger.”

We were on an Ethiopian Airlines flight from Addis Ababa to Kigali, Rwanda, which had made an unscheduled but not unusual stop along the way, in Burundi’s commercial capital Bujumbura. Heads were craning, hundreds of people popping up one by one to see what was going on.

We didn’t all know it yet, but a man had locked himself in the bathroom and was claiming to have a bomb.

So we waited. Outside the aeroplane’s small windows, the sun was bright. With air conditioning turned off, everyone became hotter and more agitated. Some pulled their bags from the overhead lockers. A baby wailed.

The air hostesses, wearing white dresses, chastised anyone who tried to stand.

“Calm down, the police are here to handle it,” said one in a green blazer. She walked through the cabin aisles, flattening her arms down in front of her as she spoke, like she was treading water. “I have seen them with my own eyes. Calm down.”

“The door is going to be open and everything is going to be just fine,” said the pilot in another loudspeaker announcement, increasing the sense of unease.

The man locked in the bathroom spoke Swahili, according to others who had been sitting near him. One woman later told me he had scraggly hair and bad breath, though that probably described a lot of us after long journeys. He shouted that women and children should leave. We couldn’t hear that and remained seated.

Eventually, passengers were allowed disembark after an emergency team had assembled. Climbing down the stairs, we were met by police, soldiers and snipers, wielding guns in the long grass beside the runway. Red Cross medical staff stood by an ambulance. A woman in light jeans passed out on the ground, possibly from the heat. “Sorry, sorry,” said an airport worker welcoming us into the departures lounge. “We wondered,” she added, softly.

Inside the main airport building, another fainting passenger was carried by on a stretcher.

At 3.30pm, almost three hours after we had landed, we were all bussed to an administration block. Among the crowd were children, Burundian hipsters, mothers and elderly nuns. We were each given a bottle of water – the first we received since leaving the plane.

A small, broad man in a suit made a speech. He said the “bomb threat” was a “major incident” and we should be grateful we were still alive.

“Before anything we thank God . . . And also the aircraft is safe. Let’s applaud,” he said, sounding excited. A door slammed downstairs, and the room broke out in nervous laughter.

“We have tried our best to manage the crisis technically and fortunately we are reaching the end of the crisis management,” the man said. “We are going to release you . . . The terrorist has been identified in the toilet,” he said.

In reality there was no bomb – just a troubled man some passengers said was returning from Canada after being deported. This was a small incident in a country where a major political and human rights crisis is ongoing.

Burundi’s latest troubles were sparked four years ago, when President Pierre Nkurunziza announced he would run for a third term in power. More than 325,000 refugees have fled the country and some estimates say at least 1,200 people were killed in two years. This year, the government was accused of committing crimes against humanity by the United Nations.

Elections are planned for next year, increasing the risk that violence could escalate again, analysts say.

During our six hours in the airport, hundreds of soldiers passed through, walking in single file through the green fields on its periphery and out of sight. It was hard to shake the feeling that the Burundians who spoke to us were excited they got to play the hero for once.

In a statement later that day, Ethiopian Airlines thanked its flight crew and the ground staff in the airport.

“We sincerely apologise to all our passengers on board the flight for any inconvenience.”