Abuse of power and obstruction of Congress cited against Trump 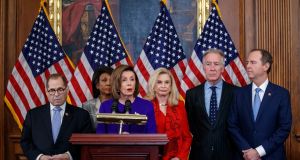 Speaker of the House Nancy Pelosi and others: a pre-Christmas impeachment vote is almost certain. Photograph: Shawn Thew

US president Donald Trump is poised to become the third president in US history to be impeached, as Democrats filed two articles of impeachment against him on Tuesday.

“We do not take this action lightly but we have taken an oath to defend the constitution,” said House of Representatives judiciary committee chairman Jerry Nadler, as he declared that Mr Trump had committed “high crimes and misdemeanours”.

Standing in front of a row of American flags and a portrait of George Washington in the US Capitol alongside other senior Democratic figures including House speaker Nancy Pelosi, Mr Nadler said Mr Trump would face two impeachment charges – abuse of power and obstruction of Congress – over his dealings with Ukraine.

The 41-member judiciary committee will now debate and possibly amend the resolution in the coming days, and is expected to vote on the articles this week. If, as expected, the Democrats-controlled committee votes to recommend impeachment, the House of Representatives will hold a full vote in the chamber, most likely within the next 10 days.

The White House accused Democrats of “a baseless and partisan attempt to undermine a sitting president”.

“House Democrats have long wanted to overturn the votes of 63 million Americans. They have determined that they must impeach President Trump because they cannot legitimately defeat him at the ballot box,” said White house press secretary Stephanie Grisham.

Democrats argue that Mr Trump committed impeachable offences in his dealings with Ukraine by pressuring Ukraine to open politically motivated investigations that could impact the 2020 election. At the heart of their impeachment inquiry is a July 25th phone call in which Mr Trump asked his Ukrainian counterpart Volodymyr Zelenskiy for an investigation into former vice-president Joe Biden, a potential challenger for the presidency next year.

In an indication of the bitter partisan battle ahead if Mr Trump is impeached and the process then moves to the Senate as set out in the constitution, Ms Grisham predicted that Mr Trump would be “fully exonerated” by the Senate “because he did nothing wrong”.

With Republicans controlling 53 seats in the 100-member chamber, Mr Trump is not expected to be convicted in a Senate trial. The constitution requires a two-third majority in the Senate to remove a president from office. No president has ever been convicted in the Senate, though both Andrew Johnson and Bill Clinton were impeached in the House of Representatives.

Tuesday’s announcement makes a pre-Christmas impeachment vote a virtual certainty, less than a year from a presidential election.