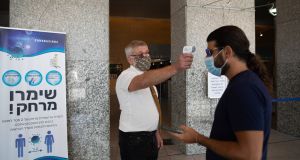 A visitor has his temperature checked at the entrance to an office building in Ramat Gan, Tel Aviv, Israel. Israel’s parliament gave the government sweeping authorities to combat a resurgent coronavirus outbreak. Photograph: Corinna Kern/Bloomberg

Israel’s newly appointed coronavirus co-ordinator has handed over key elements of the country’s fight against the pandemic to the Israel Defence Forces (IDF).

He outlined his plan, dubbed Shield of Israel, less than a week after being appointed to spearhead the battle against the virus as new data showed Israel now has the fifth highest number of new infections per capita in the world, overtaking the United States.

“ Severing the chain of infection is a job that doesn’t belong to the health ministry, and I’m pleased that the IDF has agreed to take that job. It has the capability, it has the technologies, it has the tools, it can do that. We’ll get it done well. That’s the heart of stopping the pandemic.”

The new plan, which Mr Gamzu hopes will avoid the need for future lockdowns and what he termed “illogical restrictions”, will also colour-code cities like traffic lights: green, yellow and red.

The army’s Home Front Command will be assigned responsibility for red areas with the highest infection rates and will co-ordinate its plans with the local municipalities.

“The IDF knows how to win wars,” he said. “It will also know how to win this battle.”

Earlier this year, during the first wave of coronavirus, the IDF was given responsibility for distributing food and other essential supplies in the worst-hit areas, mostly densely-populated ultra-Orthodox neighbourhoods in Jerusalem and Tel Aviv.

Israel was widely praised over its handling of the first wave and was one of the first countries to close its skies, helping to flatten the curve of infections.

Prime minister Binyamin Netanyahu preferred to take the key decisions himself and was quick to take credit for Israel’s relatively low death toll. He resisted calls to let the army take on a greater role and he also refused to appoint a coronavirus co-ordinator.

But after easing restrictions the numbers of infected soared and the government’s response to the second wave was widely criticised as chaotic.

Mr Gamzu also urged Israelis to wear protective face masks, noting that countries that have made them compulsory have seen a steady decline in their infection rate.

Some 70 per cent of Israelis currently wear masks outdoors, Prof Gamzu said, which is good “but not nearly good enough”.

He also intends to raise testing capacity up to 60,000 tests per day by forming new coronavirus laboratories.

“I expect all government ministers to back this plan,” Mr Netanyahu said. “I expect all Israeli citizens, without exception, to co-operate with it. Together, we will defeat coronavirus.”