Netherlands’ Covid-19 death toll may be up to 100% higher, says statistics office 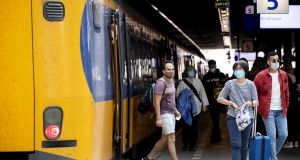 People wear face masks as they leave a train at central station in The Hague. Photograph: Sem Van Der Wal/EPA

The Netherlands has for the first time formally acknowledged that the country’s Covid-19 death toll is probably over 10,000 and perhaps up to 100 per cent higher than the official mortality rate indicates, according to dramatic new figures from the central statistics bureau (CBS).

While the official toll stands at 6,147 dead, that includes only those who died in hospital and whose deaths were recorded as due to the virus – while the real figure, which also includes deaths in nursing homes, where testing wasn’t available, is between 50 and 100 per cent higher, says the CBS.

On that basis, it says there is “a 95 per cent certainty” that the actual figure for the period from March 9th to May 24th correctly stands somewhere between 8,593 and 11,691.

The CBS says its own statisticians are now using a figure of 10,160 deaths for that period.

“We believe that for every 10 deaths registered as Covid-19 related, there were between five and 10 more that were not registered as due to coronavirus because nursing homes did not have testing available at the time,” the bureau said on Thursday.

This is the first time an official institution has placed even an indicative figure on the total number of people who have lost their lives in the Netherlands – which, after easing its lockdown, is currently struggling with a new increase in infections over each of the past three weeks.

Until now, those wishing to minimise the impact of the disease have pointed to the lower number for Covid-19 deaths in hospital, despite the fact that media briefings from official sources have always cautioned that the final figure would inevitably be “around 40 per cent higher”.

The realisation that the number dead is worse than commonly acknowledged is likely to play into concerns about the resurgence in infections and the fact that, as of Tuesday, the virus reproduction rate – the number infected by each carrier – has risen again, this time to 1.40 from 1.29 last week.

Given those circumstances, there was widespread surprise when healthcare minister Tamara van Ark announced in tandem with that figure that there would be no widening of the obligation to wear masks, which are currently confined to public transport.

The government’s decision is based on the belief that non-medical masks have limited benefits – and could make wearers less careful about social distancing, the key to breaking the chain of contagion.