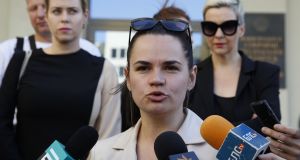 Opponents of autocratic Belarusian leader Alexander Lukashenko have vowed to continue campaigning for next week’s presidential election despite warnings of possible violence following the arrest of 33 Russian mercenaries.

The men were detained at a hotel near the Belarusian capital, Minsk, on suspicion of plotting terrorist acts, amid claims from Mr Lukashenko that foreign powers plan to try to oust him by stirring up violent protests around the August 9th vote.

Officials in Minsk say the Russians are members of Wagner, a private military company closely linked to Moscow’s security services that has fought for Kremlin causes in Ukraine and the Middle East. Kiev said it would seek the extradition of several of the detainees, who allegedly fought for Russian-led separatists in eastern Ukraine.

The Belarusian authorities said they were searching for the remainder of “up to 200” Russian mercenaries who were in the country, and warned election candidates that campaign events could be targets for violence and that internet access could be blocked temporarily for security reasons.

Investigators claimed on Friday that the mercenaries collaborated with Sergei Tikhanouski, a popular blogger who led protests against Mr Lukashenko before his arrest in May.

The blogger’s wife, Svetlana Tikhanouskaya, decided in response to run for president, and her campaign for democratic reforms in Belarus has gained strong momentum, attracting thousands of people to rallies at which she and her allies denounce Mr Lukashenko’s 26-year rule and the poverty and isolation that blight Belarus.

“All our events will go ahead as planned. Nothing is being cancelled,” Ms Tikhanouskaya said on Thursday, ahead of a scheduled rally in Minsk that her team predicted could attract up to 75,000 people.

Ms Tikhanouskaya rejects suggestions that she is somehow acting on Russia’s behalf to weaken or oust Mr Lukashenko, whose traditionally warm relations with Moscow have become strained as the Kremlin pushes for deeper integration between the two states – a relationship that Russia would inevitably dominate.

“I see the reaction of the Russians. They are already justifying themselves . . . Clearly, they need to somehow justify their dirty intentions,” Mr Lukashenko told an urgent meeting of his security council on Wednesday night, as Belarusian television broadcast footage of the mercenaries being arrested by special forces.

Russia denied involvement in any bid to destabilise Belarus.

“Of course, it’s nothing but insinuations,” Kremlin spokesman Dmitry Peskov said on Thursday.

“Russia and Belarus . . . are allies, the closest partners, so of course there cannot even be any talk of this. But certainly, this incident with Russians being detained needs to be clarified.”

While Ms Tikhanouskaya has campaigned around the country in recent days, Mr Lukashenko has visited military bases to warn of security threats and to oversee units training to put down street riots.

He warned last week that “all sorts of wars now start with street protests, demonstrations” and claimed that all over the world “professional soldiers, bandits” working as mercenaries “make big money causing provocations in certain states”.

Children may not return to the classroom until before Easter