Calls intensify for leader to stand down as demonstrations planned 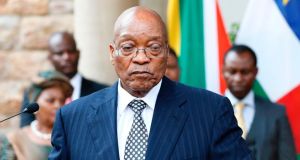 Civil society groups, opposition parties and religious leaders have all intensified their calls for the president to stand down, and urged South Africans to join the different anti-Zuma demonstrations planned for across the country on Friday.

It has been reported that 65 civil society organisations have written to speaker of parliament, Baleka Mbete, asking her to accede to a request from opposition parties to debate a motion of no confidence in the president. But it is the growing challenge to Zuma’s rule coming from within his own party and the wider tripartite alliance that will have South Africa’s beleaguered president most concerned.

Zuma’s critics maintain that his removal of the well-respected Gordhan shows that he is more interested in doing the bidding of his cronies than providing the political stability South Africa’s weak economy needs to retain investment and jobs.

Indeed, his sacking of Gordhan was followed by ratings agency Standard and Poor’s downgrading South Africa’s sovereign credit rating to junk status on Monday, which means the government’s borrowing costs have risen significantly.

Many analysts believe Gordhan and his deputy, Mcebisi Jonas, were removed because of their anti-corruption activities and their refusal to loosen the treasury’s purse strings to pay for Zuma’s development plans, which they insisted the country could not afford.

Since the reshuffle took place Zuma has also faced unprecedented criticism from within the former liberation movement, with leading ANC military veterans and former anti-apartheid activists adding their voices to the calls for his removal.

However, more significant is the fact that three of the ANC’s top six leaders spoke out publicly against his decision to sack the two finance ministers on the basis of a dubious intelligence report.

Mr Zuma was reported to have told government colleagues last week that an intelligence report had uncovered a plot by Gordhan and Jonas to overthrow the government. Gordhan dismissed the allegation as “sickening” and “complete nonsense”.

By Tuesday both of the ANC’s tripartite alliance partners, the South African Communist Party and union federation Cosatu, had also for the first time added their voices to the calls for Zuma to go.

Cosatu, which was instrumental in Zuma’s rise to the presidency in 2009, said in a statement that it was time for a new collective to lead at government level. “We no longer believe in his [Zuma’s] leadership abilities and we shall be communicating that decision to our ally the ANC,” it read.

The outcome of Tuesday’s national working committee meeting, which was widened to include provincial chairpersons and secretaries, also suggests he still remains the dominant force in the ruling party.

Following the ruling party’s discussions it was conveyed to the media that deputy president Cyril Ramaphosa, ANC secretary general Gwede Mantashe and treasurer general Zweli Mkhize had accepted they made a mistake by publicly criticising Zuma’s actions.

Speaking to journalists on Wednesday morning, Mantashe also challenged some of the criticism levelled at Zuma, saying it was unfortunate that some leaders had used an intelligence report as his reason for Gordhan’s dismissal. He said the ANC accepted that the irretrievable break down of Zuma’s working relationship with Gordhan was reason enough for the president to fire his finance minister.