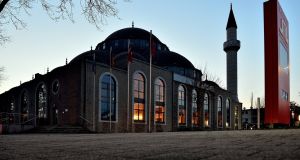 The DITIB Merkez mosque in Duisburg, Germany, one of the largest in the country. A German author has claimed the authorities know little about the country’s Muslim community. Photograph: Sascha Steinbach/EPA

Constantin Schreiber is Germany’s most famous Arab speaker. A 37-year-old television journalist and news anchor, Schreiber shot to fame as presenter of Marhaba (an Arabic greeting used for “hello”), a series that clocked up millions of viewers from recently-arrived asylum seekers curious about their new home.

After attracting praise for telling the human stories behind Germany’s refugee crisis, Schreiber has now published a controversial new book – Inside Islam, painting a sober picture of Friday sermons inside 13 German mosques he visited unannounced.

Preparing for his project, Schreiber was surprised at how little German authorities know about the Muslims in their midst. There are roughly 4.7 million Muslims and 2,300 mosques in Germany – both are estimates as there are no official figures. Nor is there any official oversight by German tax authorities of mosque finances, despite concerns over foreign funding.

“The average German mosque is not in a representative building but in an old factory building or converted apartment, which bothered me a bit,” said Schreiber. “I can understand that people don’t feel equal if they have to go and pray in an underground car park.”

During his year visiting Arab and Turkish mosques, he soon noticed patterns. All but one imam had come to Germany from Turkey or the Arab world and, of the two groups, Turkish imams’ sermons were general more political. Ahead of Turkey’s looming constitutional referendum, Schreiber declines to comment on German concerns that Ankara dictates many sermons’ contents.

A common theme on his mosque visits: concerns over too much integration and the loss of Muslim identity – a counterpoint to claims by the anti-Islam Pegida group and the far-right AfD that current immigration policies will, within decades, reduce ethnic Germans to a minority in their own country.

Schreiber’s mosque visits coincided with a series of major events and reports with links to Islamist extremism: the Berlin imam who dismissed marital rape in January 2015; the Stuttgart mosque which, in June 2016, hosted an imam who had previously called for the murder of Jews; a series of Islamist-linked terror attacks across Europe and in Germany, culminating in the Berlin Christmas market attack carried out by a Tunisian man with links to the German capital’s self-described “mosque for Islamic State”.

Given the scale of calamity carried out by extremists in the name of Islam, Schreiber was surprised how little these attacks featured in sermons.

A second surprise: the refusal of many translators and Islamic scholars to help him understand the sermons’ more complicated theological contents. One advised him to drop his project, warning that explaining sermons to readers could “deepen the trenches” between Germany’s Muslim and non-Muslim population.

The book has not been universally welcomed, with some calling it a superficial and rushed treatment of a complex and potentially-explosive topic and a gift to the AfD as it gears up for an anti-Islam federal election campaign.

Schreiber dismisses these criticisms, pointing out that his book is reportage and based on visits to randomly chosen mosques, with no claim of theological rigour or statistical representation.

Though no one questioned or challenged his presence during Friday prayers, he says just five of the 13 imams he heard speak agreed to talk to him afterwards. Despite living here for many years, only one of the eight imams he met could speak German.

A final troubling observation: brochures and books available in mosques claiming, among other things, that “God alone is the legislator” or insisting that the Koran trumps parliamentary democracy.

For Schreiber, the greatest concern of his journey was the gap between what is heard outside and inside the walls of mosques in Germany.

“Outside the talk is of integration, inside the opposition is the case,” he writes. “Mosques are political places. The majority of sermons I visited were against the integration of Muslims in the German community.”

One imam he heard warned that yielding to the temptations of the secular German “forest” would see them “eaten by the wild animals”.

“I would love to present a positive example of a sermon that builds a bridge to life in Germany,” said Schreiber, “but my mosque visits didn’t provide one.”