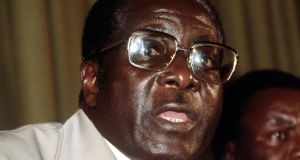 Zimbabwe’s former president Robert Mugabe, a deeply polarising figure for most of his controversial life, died in a Singapore hospital on Friday, aged 95.

Mr Mugabe, who was removed from power by the ruling Zanu-PF party in November 2017 following a military coup, had been receiving medical care at a private hospital since April.

Zimbabwe’s president Emmerson Mnangagwa, who was attending the World Economic Forum on Africa in Cape Town, announced via his official Twitter account on Friday morning the death of the former mentor he had helped to overthrow.

“Cde [sic] Mugabe was an icon of liberation, a pan-Africanist who dedicated his life to the emancipation and empowerment of his people. His contribution to the history of our nation and continent will never be forgotten,” he wrote.

Later in the day Mr Mnangagwa issued a statement saying that Zanu-PF’s leadership had met and agreed to “accorded him national hero status, which he richly deserves. We declare days of mourning until he is buried.”

Shortly after the news became public, condolences, tributes and criticism of Mr Mugabe’s rule began to pour in from around the world.

Western leaders were largely disparaging of his reign, with the UK’s former foreign office minister Peter Hain summing up feelings in the West when he said history would judge Mr Mugabe harshly.

However, many African leaders recalled the vital contributions he made to different liberation struggles against colonial rule across the continent.

South Africa’s president Cyril Ramaphosa said his country mourned the passing of “a champion of Africa’s cause against colonialism”.

“Zimbabwe’s liberation movement supported our own to fight [apartheid] oppression on multiple fronts,” he said in a statement.

Kenya’s president Uhuru Kenyatta hailed Mr Mugabe as a “man of courage who was never afraid to fight for what he believed in, even when it was not popular”.

None of the sitting African presidents who released statements made mention of the suffering Mr Mugabe inflicted on ordinary Zimbabweans during the near four decades he ruled the southern African country with an iron fist.

Among other accusations, Mr Mugabe stands accused of ordering Zimbabwe’s army to massacre more than 20,000 Ndebele civilians in Matabeleland, in the south of the country, during the mid-1980s, as he perceived them as a threat to his rule.

His ill-conceived land reform policies, which resulted in the eviction of thousands of white commercial farmers from their land in the early 2000s, also turned a country once known as the “bread basket of Africa” into a basket case.

By 2009 the economy was on the verge of collapse, and it has yet to recover in any meaningful way.

Zimbabwe’s main opposition party, the Movement for Democratic Change (MDC), which was viciously oppressed by Mr Mugabe’s Zanu-PF regime, declined to address the darker side of his reign so soon after his passing.

MDC president Nelson Chamisa acknowledged his party had “great political differences” with Mr Mugabe, but “we recognise his contribution” to Zimbabwe as its founding father.

Ordinary Zimbabweans tried to capture the complex nature of Mr Mugabe’s legacy in Africa, with many acknowledging he was both a liberator and a brutal dictator who would do anything to retain power.

“Let’s also be honest about Mugabe’s legacy,” wrote one Zimbabwean, Mako Muzenda, on Twitter. “He’s a symbol of pan-Africanism and black power and he played an important role in Zimbabwe’s independence. But he’s also responsible for untold suffering, trauma and the slow collapse of the country he led.”

It remains unclear when Mr Mugabe’s body will be repatriated to Zimbabwe. However, details of his state funeral are expected to be announced shortly.