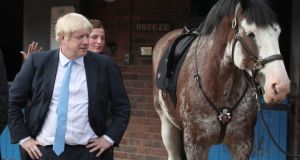 British prime minister Boris Johnson stands next to a police horse during a visit to west Yorkshire on Thursday. Photograph: Danny Lawson/PA Wire

Boris Johnson has been insisting, as he ducks and weaves through his battles in the House of Commons, that he both desires a deal with the EU and that negotiations to that end are proceeding well.

Behind both dubious propositions, however, the British prime minister is also quietly engaged in a radical refashioning of the UK’s approach to and demands of the EU that will pose new, serious challenges to Ireland and its partners.

In Brussels few are convinced by the Johnson rhetoric. The talks between a European Commission task force and a UK delegation led by David Frost, Johnson’s chief negotiator, have resumed, although the commission refuses to deign them “negotiations”, more an exchange of views than any attempt to deal.

But while the UK team has failed to make any concrete proposals on alternatives to the hated backstop, it has quietly proposed significant changes to the political declaration on the future EU-UK trade relationship, reinterpreted its supposed commitments on the Irish Border, and warned that it wants unspecified changes to the agreed dispute mechanisms and the long-term defence relationship.

The EU has been clear that while the withdrawal agreement cannot be re-opened, the declaration, an aspirational, non-binding  framework for future talks, may be amended – but it is a mutually agreed document and the EU27 are unlikely to accept amendments designed to further distance the UK from the EU after Brexit.

From the Irish perspective the proposed changes are deeply concerning.

The UK’s view now that the only obligation it must meet to avoid a hard Border is to ensure that there is no infrastructure on the Border flies in the face of the December 2017 joint declaration commitment by the UK “to the avoidance of a hard border, including any physical infrastructure or related checks and controls”.

To renege on that understanding of a pledge flowing from the Belfast Agreement is seen by Irish sources as a serious breach of faith.

And the demand that the political declaration should reflect the new desire of the UK entirely to shake off the regulatory framework of the EU is likely to make any future backstop or equivalent/alternative impossible – any mechanism established to ensure that there is no need for controls on the Border can only work if it is based on shared standards on both sides and hence regulatory alignment and mutually recognised enforcement.

The new proposals on trade and regulation from Johnson’s government represent not a marginal shift in British thinking, but a radical philosophical departure, an entirely new approach to developing the post-Brexit relationship, and one grounded in a radical wing trading philosophy.

This is the Tory party Mark 11. London has not just changed the personnel at the helm, but set the good ship UK off on a new course.

The UK would like the future relationship document to refer to the aspiration to a “best in class Free Trade Agreement” – otherwise known as “Canada Plus” – which one diplomat explained to the Financial Times would mean “no tariffs and no quotas” and a freedom for the UK to set its own regulatory standards.

It is clear the Johnson administration sees the future in terms of competing with the EU by means of cheap costs, whether labour, social or environmental – the UK as an Atlantic Singapore.

The important commitments made by Theresa May’s government to uphold a “level playing field” in key areas such as the environment and social standards, which were key to the agreement on the draft political declaration, are jettisoned.

And in purging with such enthusiasm the proponents of those commitments, the Tory party is signalling its repudiation of the long tradition of One Nation conservatism that May sought to embrace. Coming soon, if Johnson survives a bonfire of rights.

“Not so long ago Mr Johnson found it convenient to strike a pose as liberal-minded One Nation Conservative,” Philip Stephens writes in the Financial Times. “Now he has thrown overboard entirely the broad church, middling conservatism of Edmund Burke. In his anxiety to outflank on the right Nigel Farage’s Brexit party, Mr Johnson will fight an election as leader of the party of English nationalism”.

Dream on Boris! Brussels has already made clear – and member states such as France and the Netherlands, who are understood to be deeply perturbed by the latest UK initiative, will ensure as much – that future adherence to EU standards will be a precondition for any wide-ranging free trade agreement with the UK.

Tariffs will inevitably be used to rebalance any competitive disadvantages arising from deregulation. That is their economic purpose.