Dozens killed in Burkina Faso as unrest spreads across Sahel 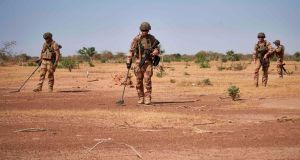 French soldiers use detectors to search for improvised explosive devices during the Burkhane Operation in northern Burkina Faso, in November 2019. File photograph: Michele Cattani/AFP via Getty

Militants killed 43 people during attacks in Burkina Faso this week, turning attention back on the restive Sahel region.

The Ouagadougou government said the attacks took place in Dinguila and Barga, two villages in Yatenga province in the country’s north, near the border with Mali.

Unrest has been spreading across the region in the years since Islamist groups took control of northern Mali in 2012.

“People are suffering, are being killed, women are being raped, children cannot go to school,” said Mr Grandi. “[The] Sahel is the place where we must intervene before this crisis becomes unmanageable.”

The UN high commissioner said the number of people displaced from their homes in Burkina Faso has risen tenfold in 2019 alone, reaching 560,000. The landlocked West African country has a population of roughly 20 million.

More than a million refugees

In Mali, another 70,000 people were displaced, meaning the total number of people pushed from their homes because of conflict has topped 200,000. There are more than a million refugees and displaced people in the central Sahel, according to UNHCR.

The Armed Conflict Location and Event Data Project, which tracks violence in the region, tallied the total number of civilian deaths in 2019 at nearly 1,300.

Burkina Faso’s own security forces have also been accused of perpetrating abuses, executing people they accuse of supporting Islamic groups without charges or a trial.

Last year, Unicef said there had been a sixfold increase in school closures in two years in central Sahel countries – Burkina Faso, Mali and Niger – because of attacks and the risk of violence. By June 2019, at least 3,005 schools remained closed.

The Trump administration in the US, which has been criticised for neglecting Africa in its diplomacy, last week appointed academic and writer J Peter Pham as the first US special envoy for the Sahel.

A biography on the Trump administration’s website says Mr Pham will be responsible for co-ordinating America’s engagement with international and regional partners to address the threat from extremist organisations.

“There are certain situations that are so complicated and require so much coordination that a special envoy makes sense,” explained Tibor Nagy, US assistant secretary of state for African affairs.