Cyclone Idai: Those who do least to cause climate change suffer the most 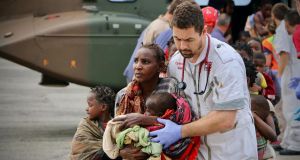 People are escorted to safety by aid workers at the airport of the coastal city of Beira in central Mozambique on March 19th after the area was hit by the Cyclone Idai. Photograph: Adrien Barbier/AFP/Getty

Cyclone Idai emerged out of the Indian Ocean.

It hit land over Mozambique, and from there caused destruction over vast areas as it tracked over neighbouring Malawi and Zimbabwe.

It arrived last weekend after days of unrelenting rainfall. Further sustained rainfall has followed, and with it rising flood levels that have yet to recede.

Satellite photographs show that Beira, a port city of 500,000 people, took first brunt of the storm. It packed winds of 170km/h, dumped a month’s worth of rainfall on an already waterlogged region, and prompted a six metre high storm surge.

The nearby Búzi river burst its banks, killing many. Much of the surrounding area is submerged in water. At time of going to press, a great many people are still stranded on roof tops or stuck up trees awaiting rescue with time running out.

Southern Africa has been hit with “possibly the worst weather-related disaster ever to hit the southern hemisphere”, Clare Nullis of the UN World Meteorological Organisation declared on Tuesday.

It resulted in the death of more than 360 people, injured thousands and destroyed homes, livestock and crops. Some 2.6 million people are believed by the UN to be affected.

Fatalities will rise sharply as remote regions are reached in the coming weeks, according to aid agencies, whose difficulties are compounded by impaired communications.

The cyclone left many areas inaccessible by both road and air due to landslides or floods. There is a shortage of boats and helicopters for rescue missions. It adds up to a humanitarian catastrophe.

Yousaf Jogezai, Concern’s country director in Malawi, says the combination of prolonged rains before and after the cyclone badly affected vast areas of southern parts of the country; its poorest region.

More than 1 million people face devastation; their houses damaged or destroyed, their crops wiped out just as they were about to be harvested – livelihoods gone in the course of a few days.

Many people sought shelter on higher ground and in community buildings such as schools and churches, but these are incapable of looking after large numbers properly.

He cites the example of a school with 500 people living in it with limited water supplies. This brought obvious risks due to water-borne illness, notably cholera.

In most cases, “they could not bring bedding, blankets or kitchen utensils with them”. They were already subject to “food insecurity” due to a drought in the area last year, though this year they were expecting a good crop. The only hope now is of a winter crop on land that would stay wet for longer than usual.

Concern had established a successful crop project in the region backed by training in farming for local people. It was enabling life beyond subsistence agriculture, but has been severely undermined by the worst extreme weather episode Jogezai has ever experienced.

Our @CopernicusEMS #RapidMappingTeam is still busy with three parallel TC #Idai activations in #Mozambique, #Zimbabwe & #Malawi
In Mozambique the magnitude of the floods is enormous
From 17 to 19 March, flooded the area in the around Mafambisse has increased from 27.6 to 146 km2 pic.twitter.com/YiFt4yXydP

While Concern received little warning of the cyclone, Jogezai believes sustained rains and flooding are having a worse impact. The destruction and extent of land covered by water is preventing people returning to their homes. Concern’s immediate task is supporting local authorities on logistics; assessment of damage and rescue operations including delivery of food.

Concern will move into relief phase over the next month by providing clean water, sanitation, food, bedding and malaria prevention. It will then attempt to get agriculture production back on track.

Noreen Gumbo, head of Trócaire’s humanitarian division, is leading its response. It has country teams in Malawi and Zimbabwe and is working with Caritas in Mozambique.

At present, she says, they are concentrating on “needs assessments”; how to provide food, buckets, aquatabs to disinfect water, and tents. They will then try to help people return to their villages and see what structures can be provided while homes are being rebuilt. Then attention will turn to cropping.

Gumbo lived in Zimbabwe for 25 years and has worked in all three countries. In her view, the cyclone was worse than a devastating storm in 2000 but she stresses it will take weeks to know the full extent of damage.

Each of the countries has its own particular problems. In Zimbabwe, it’s poor infrastructure due to political unrest over the past decade; in Mozambique, it’s extreme poverty.

“The people are amazingly resilient, but this is a tough one.”

Trócaire was also attempting to move subsistence farming to the generation of “cash crops”, so that families could fund healthcare and education. It is going to be a real struggle in that regard, given what has happened.

“It’s pretty scary stuff if this is representative of what climate change is going to bring,” she adds.

It’s too early, however, to link Idai to climate change.

“We can be pretty confident that rainfall associated with such systems has become greater due to human-induced climate change,” says climate scientist Prof Peter Thorne of Maynooth University.

“There is also some evidence that cyclones are slowing down. This is less certain. But a slower forward motion obviously would mean the winds and rains stay in any one location longer,” he adds. “We really cannot say whether the particular cyclone evolution and track would have been made any more or less likely due to human interference in the climate system.”

On flooding, Thorne points out that a warmer atmosphere can hold more water. He also says that if the ocean surface is warmer there is more moisture going up, and that what goes up must come down.

“That is the part upon which the science would point most clearly to a human fingerprint on the event.”

The destructive power of storms is likely to increase in future as the world warms up, and they are predicted to be more frequent in some regions. It seems this is already happening in the Indian Ocean, which this year had seven intense cyclones compared with an average of three.

Landry Ninterets, of the climate NGO 350.org, says there is an injustice that goes with it.

“For a continent already wracked by its severe impacts, cyclone Idai is just another chilling reminder of the reality of the climate crisis,” he says.

“Whilst the most vulnerable communities are facing the real impacts of climate change on the ground, government authorities are yet to come up with real and strong commitments.”

Government inertia and lack of concrete actions to solve global warming “are an insult to people facing untold suffering in every corner of the continent”, he adds that it continues to be “an open field” for the fossil fuel industry.

Greenpeace campaigner Mel Evans says the storm is further proof that the people least responsible for the climate crisis are suffering most.

“The average CO2 emission of a citizen of Mozambique, Malawi or Zimbabwe is a tiny fraction of a European’s or an American’s.

“The people who have done the least to cause climate change are at the front of the queue to receive its impacts and have far fewer resources to prepare for the storm, or repair the damage.”

“The standard of housing, the size of the population and the effectiveness of the early warning systems . . . these are the sorts of things we need to think about as we move into a world where these events become more severe,” Dr Friederike Otto of Oxford University’s Environmental Change Institute told the Guardian.

The link between global warming and cyclone intensity is highlighted by Dr Paulo Ceppi of the Grantham Institute at Imperial College London.

“We need to make every effort to follow the Paris Agreement target of remaining below 1.5 degrees of global warming in order to minimise future increases in the severity of tropical storms.”

It all comes back to human-induced carbon dioxide (CO2).