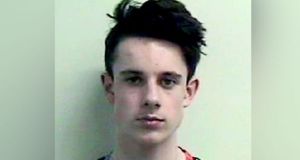 Aaran Campbell (16) will serve at least 27 years for the abduction, rape and murder of Alesha MacPhail. Photograph: Police Scotland

A teenager who admitted the rape and murder of a six-year-old girl on a Scottish island last summer has been jailed for at least 27 years.

Aaron Campbell snatched Alesha MacPhail from her bed as she slept at her grandparents’ home on the Isle of Bute on July 2nd.

He was convicted at the high court in Glasgow last month where a jury found him guilty unanimously following a nine-day trial. Campbell finally admitted the crime in a psychological report prepared ahead of his sentencing on Thursday.

Lord Matthews sentenced Campbell to life imprisonment and ordered him to spend at least 27 years behind bars before he can apply for parole, but warned he may never be released.

The judge said social work and psychologist reports “had painted a clear picture of a cold, callous, calculating, remorseless and dangerous individual”.

He said: “You went into the house and then her bedroom. You removed her from there and took her to a secluded spot where you violated and murdered her in the most brutal fashion.

“It is difficult to imagine the distress which her family must have suffered, not only when she went missing but when the awful news came in that she had been found dead.”

He said Campbell had shown a “staggering lack of remorse” and told the teenager: “Not once did I detect a flicker of emotion from you”.

Alesha’s mother Georgina Lochrane and other family members were in court for the sentencing and she jumped up from her seat and shouted at Campbell as he was led away. One woman sobbed and rushed out of the courtroom as Lord Matthews described what happened on the night of the murder.

Campbell had been at a party drinking and went into the house where Alesha was staying looking for cannabis, and entered her bedroom.

Lord Matthews said that according to the psychologist’s report: “When you saw Alesha your reaction, according to you, was as follows: ‘A moment of opportunity... At any other time in life, murder wouldn’t have been the conclusion. If I was a year younger I don’t think I would have done it... All I thought about was killing her once I saw her’.

“You said that Alesha was drowsy and became a bit more awake when you went out. At one point she asked who you were and where you were going. You said you were a friend of her father and that you were taking her home.”

The court heard that the teenager had said he was “quite satisfied by the murder”.

After the sentence was read out family members shouted “evil” and “beast” as Campbell was led down to the cells. The teenager could not be identified during the trial due to his age but following his conviction, Lord Matthews lifted a ban on disclosing his identity.

Campbell inflicted horrific injuries on the schoolgirl before dumping her body in nearby woodland.

Pathologist John Williams told the trial Alesha had 117 injuries, and a post-mortem examination indicated she had died from “significant and forceful pressure to her neck and face”.

The little girl was days into her summer holiday with her father Robert MacPhail (26) and grandparents Angela King and Calum MacPhail when she was snatched by Campbell, who tried to blame her father’s girlfriend Toni McLachlan (18) for the crime.

Brian McConnachie QC, representing Campbell, said the psychologist’s report found that the teenager “presents with a range of traits on the psychopathy checklist and also has a wide range of factors present in relation to potential sexually harmful behaviour”.

He said that Campbell’s upbringing was “less than ideal” but that this was not a mitigating factor.

Ann Marie Cocozza, of the Families and Friends Against Murder and Suicide charity said Ms Lochrane, Alesha’s mother, had offered to volunteer with them.

First minister Nicola Sturgeon said on Twitter: “It’s impossible for any of us to comprehend the pain and anguish of Alesha’s family.

“I just hope that in time they can draw some comfort from knowing so many are thinking of them – and cherish the memories of the beautiful wee girl who graced their lives.”

Scottish justice secretary Humza Yousaf also tweeted: “My thoughts v much with the family and friends of Alesha MacPhail. My deepest sympathies for the unimaginable trauma and horror they have experienced. There are no words.” – PA