Why I am taking part in the school climate strike today

One student and her father, on why she is leaving school to strike for climate action 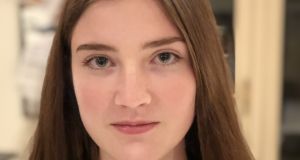 Sophie Gibbons: Friday is a global day of striking from schools and it will be almost entirely led by school students worried about the environment.

Today is the day. After weeks and months of organising, thousands of students from across Dublin and around the country will march out of class to meet outside Dáil Éireann for what may well be the largest climate protest yet. It is a global day of striking from schools and it will be almost entirely led by school students.

I will be leaving school early on Friday morning with my friends to join the march in the city centre. We have all made banners and signs to hold and show what we are fighting for.

When climate change is mentioned, the first thing that comes to people’s minds is usually the fossil fuels being pumped into our atmosphere and rising sea levels. Although these are key factors contributing to the crisis, there are many more that are even more heartbreaking, and for me, the worst is the destruction of our natural world.

Traces of plastic have been found in the bodies of creatures living in even the deepest parts of the ocean, which is truly shocking

Humans are flattening entire rainforests packed with diverse species of animals. We are pumping poisonous materials such as oil and plastic into our oceans, destroying the delicate balance of life. We are killing highly intelligent animals such as whales and elephants with no remorse. And this is happening right here, all around us, every day. Traces of plastic have been found in the bodies of creatures living in even the deepest parts of the ocean, which is truly shocking.

Only a few months ago in Dún Laoghaire, there was a spillage of millions of plastic shards from a building site right into the sea, doing unimaginable damage to the ecosystem right beside where I live. There was an attempt to clean it up by the local people, but it was mostly left unnoticed. This sort of thing, and much worse, is happening all the time and we are doing almost nothing to stop it.

I feel like I’ve known about climate change for a long time, although I never really heard about it in school and rarely heard it talked about on the TV or radio, at least not until very recently. It was, however, often discussed around the kitchen table at home so it has always been in the back of my mind.

Realising it is happening is one thing, taking action is the next step and it needs to happen – fast

I was honestly confused as to why such a serious matter wasn’t discussed with much more urgency but it seems to have really taken everyone this long to realise its true impacts and just how much of a crisis this is.

Only now are people waking up and seeing the impacts all over the world, although some people remain in denial. However, this is not enough. Realising it is happening is one thing, taking action is the next step and it needs to happen – fast.

The words of Greta Thunberg were a wake-up call for a lot of people in denial or unaware of the issue. After listening to her Tedx speech from Stockholm I was amazed. I thought it was inspiring and brave for someone my own age to stand up and speak to that many people about something she felt so strongly about.

This has to be the start of something big, of action from everyone iso that my generation – and hopefully many more to come – will have a world to grow up in

She spoke the truth and she spoke it loud and clear, showing the importance of this topic and the importance of taking actions straight away. She said, “What we need more than hope is action; once we start to act, hope is everywhere.”

The climate march on Friday is important and will get lots of people talking about the climate crisis. However, it can’t be just a once-off, this has to be the start of something big, of action from everyone in Ireland and all across the world to save our planet so that my generation – and hopefully many more to come – will have a world to grow up in.

Sophie Gibbons (16) is a transition-year student in Dublin

A father writes: Why I am supporting my striking child

Rather like nostalgia, being young these days is not what it used to be. When I was leaving college in the mid-1980s, all we really had to worry about was economic stagnation, a depressed jobs market and mass emigration.

Looking back from the relatively prosperous second decade of the 21st century, I never thought I’d be nostalgic for the days of rented TVs, chilly flats, public payphones, hitch-hiking and dodgy haircuts.

Granted, today’s youth have smartphones, the internet, social media, Netflix and a slew of other technologies that were the stuff of science fiction 30 years ago. For the most part also, they live in a more tolerant, open society.

Whatever about our mild physical privations, it simply never occurred to my generation that the future could well be infinitely worse, rather than incrementally better. Yet, this is the bitter reality that today’s youngsters, including my children, have to live with.

More than half the world’s wildlife has disappeared since I was in primary school. The fingerprints of human-induced pollution extend from the edge of space to the ocean’s depths. The biosphere itself is now threatened by a single species.

The covenant of intergenerational trust has been sundered. We must now fight to preserve their world, and so give the young real reason to believe in their future

The young are increasingly alarmed and many are taking to the streets while we adults continue to dither, unable to grasp the scale, speed and severity of the crisis. Meanwhile, the media and political classes vacillate, seemingly bewitched by the latest Brexit snafu, as if any of this will matter an iota in our climate-ravaged future.

“You say you love your children above all else and yet, you’re stealing their future in front of their very eyes” is how Swedish school strike leader Greta Thunberg (16) eloquently put it. Greta is the same age as my eldest daughter.

The covenant of intergenerational trust has been sundered. We must now fight to preserve their world, and so give the young real reason to believe in their future.